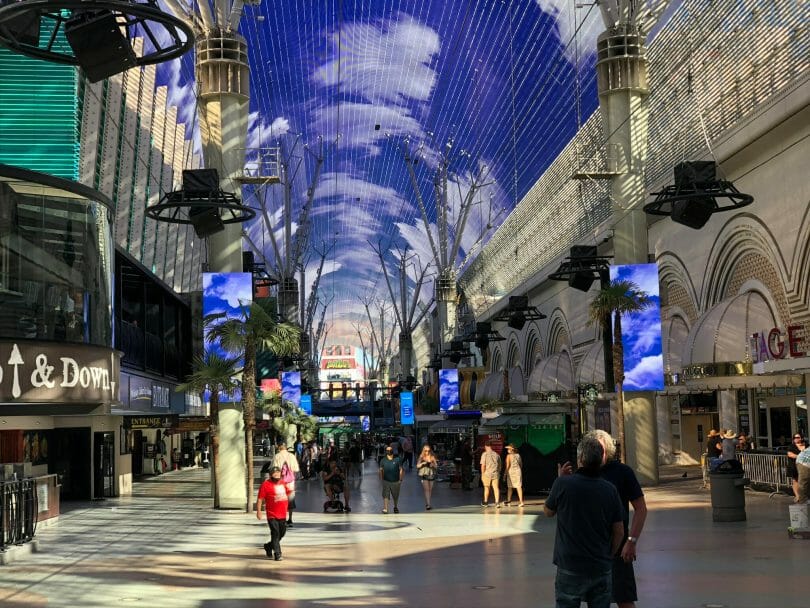 I’ve written in the past about the Las Vegas Advisor and the American Casino Guide, both of which offer coupons that can be redeemed for a variety of discounts and perks, such as food discounts, show ticket savings, as well as (important for this article) gambling offers.

Many of the offers are redeemable in the Fremont Street area at many of the downtown casinos. This trip, despite spending a few nights downtown at the Plaza, I didn’t get to use all the coupons at my disposal downtown; instead this time I concentrated play on a few of the more valuable offers to get my coin-in up at various establishments.

Coupons can be a useful form of Advantage Play as they temporarily improve your position and can even put you ahead. This can give you budget and runway to keep playing above and beyond what your budget would normally avail you to do. For those gambling on a budget or trying to make their money last, this is one useful way to do it.

Here’s how my coupon run went this time out:

I did the Golden Gate in two passes. The first day I did the table match play offer, as well as a coupon that pays 2-1 for the first natural blackjack. I used the two $25 match plays (one each from the American Casino Guide and the Las Vegas Advisor) and I broke even.

Having cashed in $100 into chips I decided to keep playing. I then went on what was a pretty epic run where I slowly built up to as high as $350, treading water at a few points along the way, and eventually cashed out at $300. Doing $10 bets, and later, $15 bets per hand, I thought that was a very nice run, especially since I was there the better part of an hour.

My second visit, since I had the $200 plus the original hundred I was willing to spend, I redeemed their coupon where you earn $5 in free play for every 50 points earned. It takes $5 to earn a point on slots, so it’s $250 in coin-in for every $5 in free play you earn. Presuming 90 percent payback, it’s $25 lost for every $5 free play earned, not the worst rebate offer.

I pushed a bit on a few games probably harder than I should have, but ultimately earned $20 in free play for my efforts after a couple hours of play. I was able to convert the free play into about $50, so I ultimately lost $250 on the slots, and $50 altogether.

Downtown Grand had four coupons available for use:

First off, the 50 points you need to earn at Downtown Grand on slots is $50, or $1 per point, so it’s easy as pie to get them. Second, I played Super Lit Vegas and Jolly 8s, both of which had plays. I converted heavily on Super Lit Vegas, and not so much on Jolly 8s, for a roughly $75 profit.

Unfortunately I lost about that amount on the tables. I opted for Craps, and while I converted the $10 Match Play, I did not convert the $50 Match Play (decided to go big or go home with that choice on the LVA coupon). I lost about $75 on that.

I then converted successfully my $20 in free play to cash. On my way out I saw another $10 Match Play coupon on the kiosk so I went back to Craps, tried one more time, lost again, and basically left about even.

El Cortez has a coupon you can redeem to get free play. You go to the kiosk to see what you won and activate it. Theoretically you can win more than $10, but I always have received $10 so far.

I opted on two occasions to attempt to earn the 300 base points needed to play the daily kiosk game active at the time. El Cortez is also $1 per point, so I played $300 in coin-in both times. The first visit I lost about $150 and the second I made about $150 playing slots, and both times the kiosk gave me $10 to Siegel’s, which I didn’t end up using.

I also did a small amount of Craps and lost about $80, so that was my overall loss for El Cortez (the free play didn’t do much for me).

The D is a bit more complicated for me as I had more to work with. I had:

I started at Blackjack with the four Match Play coins. Blackjack at The D had a $15 minimum during my visit, vs. $10 at Golden Gate. I converted three of my four Match Play tokens successfully and, like at Golden Gate, opted to keep playing. Unfortunately my luck ran out pretty quickly, and I opted to walk once I was up $50, so that was my final take from tables.

So for hours of play at The D, between tables and slots, I left down about $25. Best of all, I had some food and beverage credit as part of my offer, so I was able to eat on them too.

Four Queens has two coupons of value. One is a $10 free slot play in the Las Vegas Advisor; the other is the ability to double up to 500 points worth of play, which is found in the American Casino Guide.

Binion’s, under the same ownership, has similar coupons, but I always found myself not getting much of value by splitting my time between the two; since I knew I was going to play Silver Strike to some degree at Four Queens, I concentrated my play there.

I ended up spending a couple hundred on slots and Video Poker there, along with about another $100 on tables just to break up the slots. I did bring home $80 in Silver Strike tokens and, after doubling my points, was able to cash out $14 in points, so I ended up down roughly $200 at the Four Queens. Given that it’s $5 a point, and I doubled 200 points, that’s about $1000 in coin-in at the Four Queens on the slots – not horrible, but not great.

As part of my stay at The Plaza I redeemed a few coupons:

The Match Plays was a split; I won the $10 one and lost the $25 on Roulette, so I was ultimately down about $15. The free slot play I converted into $15, so my coupon efforts were even.

The Plaza was where I spent a ton of time over the course of my four nights downtown, and my coin-in there reflected it. I ended up accumulating enough points to get $50 in free slot play, plus I got $40 from my Bingo play in free slot play on top of it. Given I won on the slots and Bingo there, I certainly got a lot of value out of my time there and made my money work hard.

This trip I left about even after a couple of hours, which I was happy with.

If I was willing to hit and run on coupons, I would be happy with the $357 in value I got from the coupons redeeming for various offers. I got at least a dozen hours of play out of the value derived from the coupons, given I didn’t really gain or lose too much at any one casino from the play derived from those visits. That’s a huge amount of value compared to the potential for slots and other games to go sour quickly.

The American Casino Guide sells a coupon-only version of the book for around $10, and generally speaking the closer to the end of a book cycle, the less expensive the book will be. (They also sell a full book that features a ton of great information for a few bucks more, but coupon-only book buyers get access to the same information in an app.)

The Las Vegas Advisor membership options include a $37 annual digital membership which includes a copy of the member book with the coupons. The membership includes an incredibly informative monthly newsletter that is alone worth the price of admission for Vegas fans, but the book clearly adds value too.

So I spent $47 and got a ton of fun and entertainment. And despite things like reduced restaurant availability and buffets closed in a weird year like 2020, I was still able to unlock the value of the books as there was a whole lot more I could have leveraged in a normal year.

Also, I had a rental car, and didn’t avail myself of a bunch of other coupons available to me for casinos beyond the strip and downtown, so that should give you an idea of the potential value there.

Both books list their coupons on their site you can get an idea of what’s available, but I highly recommend those who are going to spend time downtown or bouncing around casinos to check into these options and invest in them – you’ll gain a lot for a little.