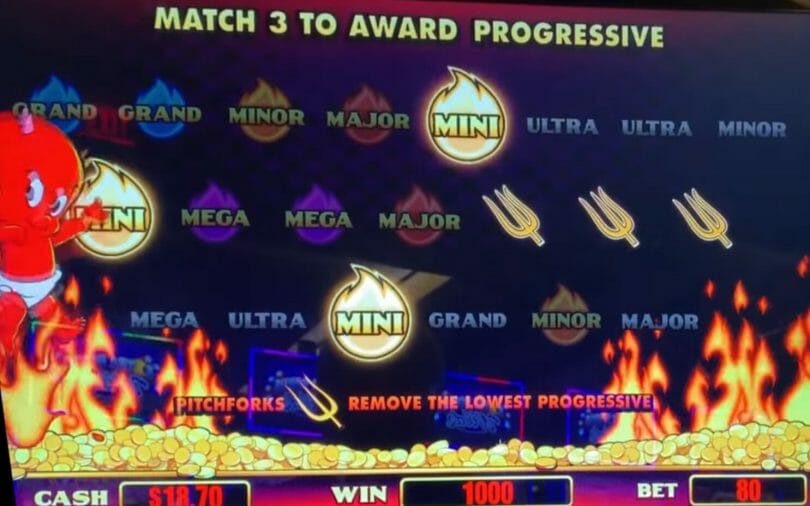 It has long been conventional wisdom that you can tell the difference between a true pick bonus and a predetermined one if you are shown the other choices at the end of the picking bonus.

I previously wrote about the Everi game Smokin’ Hot Stuff Super Wheel and how, despite its predetermined bonus, it shows the other options. One unanswered question at the time was whether this was an aberration or if Everi was going to continue down this path.

More games with picking bonuses have come out, and it seems they have chosen to continue the pattern of having predetermined picking bonuses that show the other outcomes anyway. This includes:

Once a manufacturer starts doing things a certain way, you have to expect they had a reason for doing so, and will keep doing it that way. In a more recent conversation with Everi they confirmed they did this on Smokin’ Hot Stuff Wicked Wheel, so with that now confirmed, my eye began to roam for other potential examples, and found them pretty easily.

Predetermined bonuses can be attractive to make a bonus move along faster. There’s the more practical matter that true pick bonuses can become pretty giganic. Having a progressive pick bonus that’s true pick can mean having a lot more choices to get to the finish line, like Rising Panda, and that only has four progressives to Super Wheel’s six. From a game design perspective, going the predetermined route allows the outcome to be reached more quickly and efficiently.

Having a true pick format with a more traditional picking bonus round can lead to 40-odd choices on the board, like Jackpot Party, Airplane or Vacation (all by WMS). But Everi has a lot of card on the Jokers’ Wild board too; but the WMS bonuses have eight outs (with the chance to go back in), while Everi has just the three devils that ALL need to be picked to end the round… and somehow they get picked relatively early in the bonus more often than not on the slot videos shown.

With Everi seemingly doing this consistently with the reveal, it would also call into question picking bonuses on older Everi games, like Jackpot Jump, as well as other more recent releases like Willie Nelson and Little Shop of Horrors, which have a different sort of picking bonus.

Those picking bonuses seem to be more balanced on the surface (such as requiring the +x picks being selected to keep things going), a sign of a true pick structure.

So the conventional wisdom has a major asterisk – at least some of Everi’s picking games should be considered predetermined unless proven or said otherwise. Of course, this ultimately has no impact on payback over time. But for those who feel the pressure of picking bonuses, you can take solace that you’re not responsible for what shows up.

Here’s a video from Brian Christopher with a progressive pick, where it reveals the other options, but he realizes what’s going on, starting at 6:28: