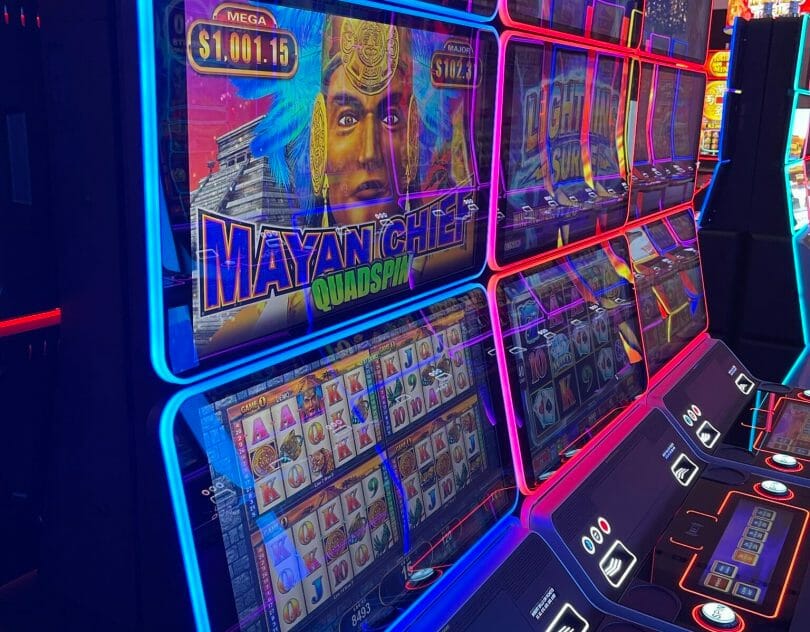 This year, for the first time, I had the opportunity to attend the Global Gaming Expo (G2E), which is where the major gaming companies showcase what’s coming up and make major announcements about what’s ahead.

I had the opportunity to spend time at most of the major booths during my visit, and was able to schedule time to speak directly with a number of the slot makers

In the coming days and weeks I’ll do more specific highlights from those visits, as well as embed videos from some of the channels putting out content from G2E (a number of which I got to meet or see during the event as well), but today, I’m going to focus on more high-level discoveries and trends I spotted during the event.

There’s a LOT of Games Coming Out

A consistent thread that came up in conversations with some of the manufacturers is while the pandemic may have shut down casinos, it did not shut down game development. But with casinos closed and then reopening, the focus was not on new game releases for a time. This has led to a backlog of games in many circumstances, and now they’re beginning to burst forth.

That seems to have changed, with many casinos investing more heavily over the past year, as the pandemic has forced some rethinking of old norms. Many casinos have been rolling in a lot of new machines, and this is good for players as this also means a lot of new games coming out.

There was an embarrassment of riches in terms of the amount of new slot games that were on display, and there definitely was a lot of excitement on the game design side, so with any luck we’ll be seeing a lot of new options on casino floors in the coming year.

Sequels aren’t new in any entertainment space, slot machines included, but it definitely seems like in recent years the trend has been increasingly pivoting towards new games that leverage something old.

Versions of this included:

To my eye there was quite a bit of this this year, which seems to have been building over the past few years, but it’s also hard to fault the slot makers for banking on proven themes – Buffalo sticks around year after year for a reason, after all. But you should expect more brand extensions and less completely new concepts overall.

Imitation is the Sincerest Form of Flattery

Aside from manufacturers extending their own brand, there was certainly a little bit of some manufacturers doing their own take on certain concepts. For fans of certain game types, you may find yourself also liking the variations released by other brands.

Those who saw the proliferation of hold and respin style games in the aftermath of success from Lightning Link and Lock it Link, those continue to appear in new forms and variations, for instance.

The New Games are Awfully Pretty

A number of manufacturers continue to step up their game graphically, doing really amazing stuff. The pandemic may have allowed extra time for polish, but I expect this is just a continued growth of the manufacturers’ ability to produce games with even better graphics and polish.

Every manufacturer had something out there that was extremely eye catching, and with newer machines being able to do things like graphics in 4k, or appear on extremely tall or large (or both) monitors on the casino floor, I expect that will continue to be a focus.

A Great Year for Slot Fans

The upcoming year should yield a lot of amazing games to come, hitting casino floors really soon! Stay tuned here on the site for G2E recaps, and share in the comments what you’re most excited to learn about!