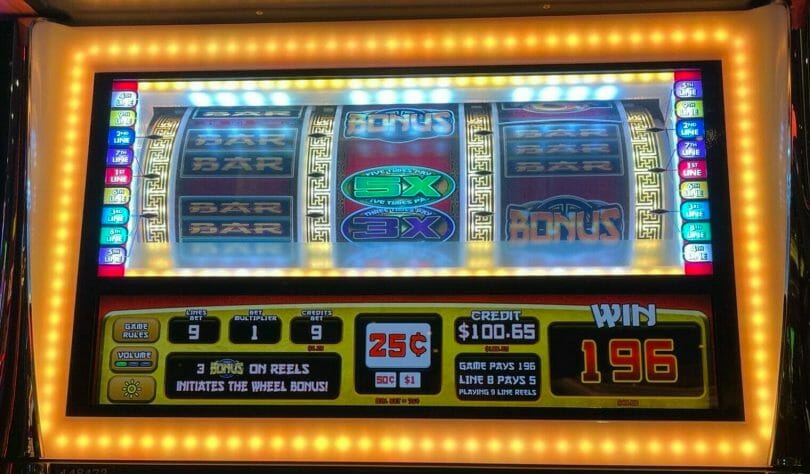 IGT has a reputation for producing good mechanical slots, and Jin Long 888 is a great example of a modern game that features a number of things that make many of the IGT games great, but then adds a couple of new wrinkles.

The game is a three mechanical-reel slot machine, with a monitor atop it to track the jackpot progressive (won by landing the top multipliers on both wheels at max bet) and to allow for the bonus round. The game is most often found in dollar denomination or higher, but occasionally I find it in quarters, which isn’t a bad level to play it at for a low to mid better.

The wheels are unlocked by betting more lines; playing 9 lines unlocks both wheels. But some versions also have a line multiplier, which can amplify both the base game and the bonus wheels.

The base game itself is pretty straightforward. The reels feature bars, 8s and bonus symbols, as well as multipliers that pay without line hits, but multiply line hits as well, and can go up to 8x. In the middle reel there’s a whole stack of them, which can get pretty valuable with the right first and last reels.

But it’s the three bonus symbols, scattered one on each reel, that leads to the wheel bonus. Each wheel features credits and multipliers.

As you can see, even betting 9 credits, and without getting all the best multipliers, you can have quite a good outcome, as shown here on a $2.25 bet winning $150. The bonus isn’t always easy to get, but when you land it, the potential is very strong.

Brian Christopher got a jackpot handpay on Jin Long 888, starting at around the 5:00 mark:

I participated in a group pull with Brian in Atlantic City a couple of years back, was the first spinner and got a first spin bonus on the game: