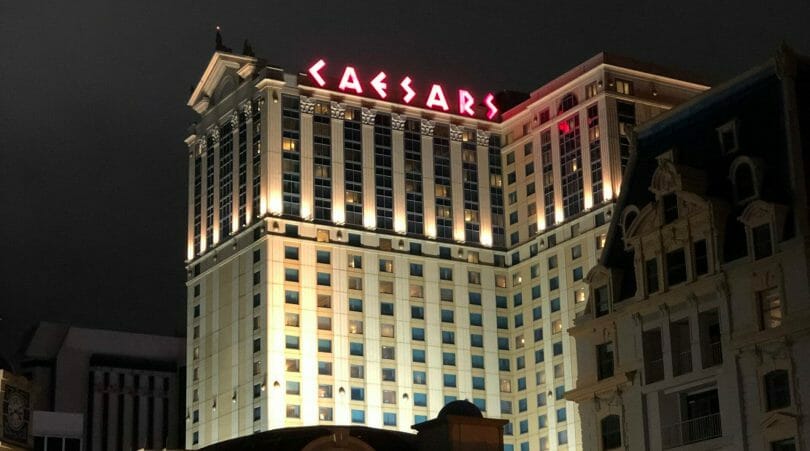 Caesars Atlantic City is the East Coast version of the fabled Las Vegas institution. As I write this, it will get be getting a lot bigger all of a sudden, as it prepares to absorb the Wild Wild West portion of what is currently part of Bally’s Atlantic City.

As the second casino to open in Atlantic City more than 40 years ago, it has a lengthy history in New Jersey as well. Let’s take a look at the casino as we wind down are look at the various Atlantic City properties.

The Caesars Atlantic City casino floor is two levels, featuring a large table game area and machine area on the first floor, and a smaller selection on the second floor. There is a solid selection of higher denomination machines, as well as penny slots and a couple of significant video poker machine sections, one on each floor. With the Wild Wild West section being added into the mix, the new Caesars will have more than 2,000 slots to its name.

Both Caesars and the Wild West section still hang on to some older games, but they have been slowly modernizing the slot floors over the past couple of years. But you can still find quite a few classic games hanging around. Video Poker is the standard (meaning poor) pay tables, so you can expect an equally poor payback on the slot machines.

The table games are decent in selection; I can’t recall ever seeing more craps tables in one place than I have seen at Caesars Atlantic City, and have so many open at one time either, especially in Atlantic City. The minimums can be a bit higher than the average, but I’ve also seen decent minimums, so it will depend on when you visit. Wild Wild West is known for value minimums, as low as $5.

Caesars rooms are considered a step up from either Harrah’s or Bally’s, and while Bally’s has mostly outdated and aging rooms just like Caesars, Harrah’s has been through a pretty significant remodeling in recent years. As such, while Caesars has a higher-end aim, Harrah’s just feels more modern than the rooms at Caesars. But Caesars do have a more luxury feel and target, and Caesars has a much stronger location being on the boardwalk.

Eldorado has promised as part of their acquisition of Caesars that they would invest in updates to their properties in Atlantic City, and it is anticipated that Caesars will receive a good chunk of the funds since both Harrah’s and Tropicana, the other remaining Caesars property after the Bally’s sale, have both seen significant investments in recent years.

As you would expect, Caesars Atlantic City is part of the Caesars Rewards program, and since I’ve written about it extensively, I won’t add anything about the program itself. Atlantic City, however, has a couple of weird quirks.

First off, it operates a bit more like a locals market, with things like Return Rewards to encourage a repeat visit within 60 days of the previous one. Their offers tend to include both free play and reward credits, with free play offered in more frequent intervals than the reward credits. They also do a lot of free gift promotions, like gift cards or actual items. I regularly use a piece of hard luggage I got from them last year.

Second, where you play the most is where your offers are anchored. So if you spend more time playing at Harrah’s, your offers will come through Harrah’s, for instance. This can be important as you can only claim things like your free play at the casino where the offers are hosted, and that may mean having to head over to a different casino.

However, you can generally claim the rewards credits portion at any of the properties (except Tropicana for now, as it’s on a separate system still), as long as you insert your player’s card into a slot at least once.

On the bright side, all play done at Caesars casinos is factored into your offers, so if you bounce around between the three of them throughout a visit, all of that play gets factored in.

Caesars has a good balance of options, although it does tend to lean on the fancier side overall, fitting for Caesars’ flagship property. During more normal times, Nero’s Sunday Brunch is a pricey, yet incredibly delicious selection of foods handled buffet style.

There’s a 24-hour quick bites option on the second floor, a regular buffet on the third floor, and other options like Gordon Ramsay Pub and Grill and Cafe Roma. It’s a good mix of options.

The theming is pretty Caesars-ish – a slimmed down version of what you encounter in Las Vegas, basically. It’s pretty subdued in many areas, an elegant looking casino, but there’s statues and more overt theming over near the hotel lobby.

Attached to Caesars across the street is a mall that has changed hands probably one too many times in recent years, and has slowly been becoming a dead mall. Caesars recently retook ownership, and perhaps can revitalize the shopping aspect as part of its efforts to modernize and invest in AC.