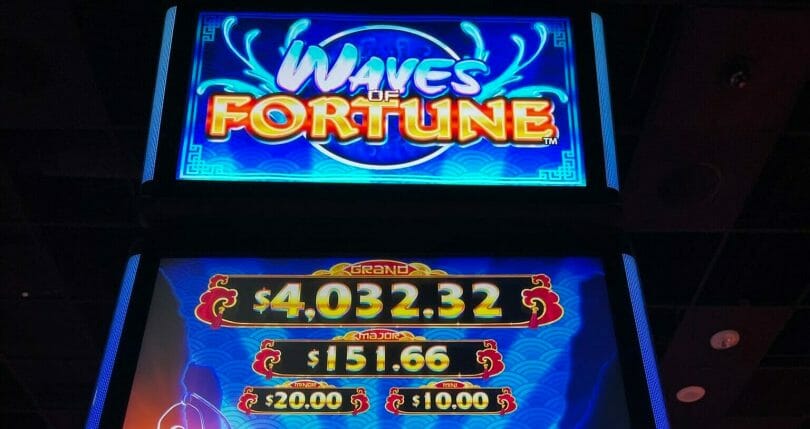 Bluberi is a manufacturer I rarely encounter, but I’ve seen their games in a couple of casinos over the years. During my most recent visit to Rocky Gap I saw one of their games on the casino floor and gave it a quick go.

Waves of Fortune has a few key features, similar to what you may find on other slots, so there’s nothing revolutionary, but it’s a fun game nonetheless.

The game features 30 lines and 50 credit bet increments. There’s four jackpots, two proportional to bet and two that are progressives that also adjust with the bet.

The game features stacked symbols, which are indicated by either a red or blue background color (depending on if it’s the base game or a free game, respectively), and a symbol is selected each spin.

Mystery Wilds can be triggered on any spin, where anywhere from 2 to 15 mystery wilds are added to the reel set after the reels come to a stop. Mystery wilds are more frequent during the free games.

There’s also an Insta Hit Bonus, which is a full reel symbol on reel 5. When triggered by landing completely within reel 5 of the reel set, the game converts into a set of reels with coins on them. Coin imprints will appear on some reels, which indicate the chance for enhanced prizes.

After the coins come to a stop, non-imprint spaces can get an imprint, increasing those coins’ values. This happens before the reveal takes place.

However, there’s two types of Free Spins symbols; ones with red letters appears on reel 5 and can multiple the spin count by 2, 3 or 5, yielding potentially up to 100 free spins. Retriggering is possible, and the mystery wilds feature occurs more frequently in the bonus.

Overall, it’s a game with some features and bonuses to keep things interesting, although nothing revolutionary. But it’s got enough things going on to keep things active and interesting for those that like those sorts of games.