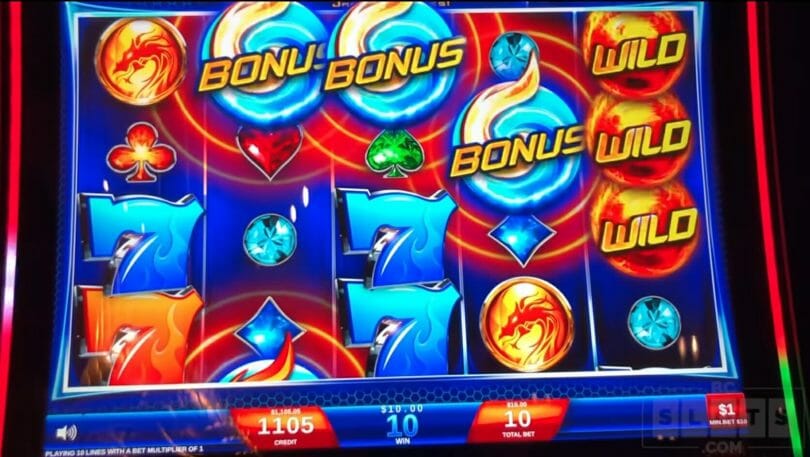 Wild Fury is a game that combines the excitement of winning jackpots with an open-ended bonus structure, something that can create some really exciting moments playing slots. But even at the base game level, the game can be pretty satisfying.

The game’s done well enough to yield sequels and clones, and so your ability to find one like it on the casino floor is pretty likely nowadays.

The game is a 5×4 reel set with 60 credit bet increments. The game is a pretty straightforward slot, but features a red and a blue dragon that can periodically offer a tell that something’s coming. If they fly by, a smaller instance of what they alert takes place, and if they soar by and then fly down over the reels, a larger instance will occur.

The red dragon is an indication of wilds on the reels, while the blue dragons is an indication of a cluster of higher paying symbols. On the larger tell, multiple reels will be covered in flames to reveal wilds in the case of the red dragon, while for the blue dragon it heralds higher paying symbols, generally the red or blue 7s, appearing in a potentially valuable combination.

If you get three bonus symbols, you spin a wheel that can yield 10, 15 or 20 free games to start.

Finally, there are +1 Spin symbols that can award an additional free game, which can keep you in the hunt for additional wilds or jackpot upgrades. Up to 100 free games can be played.

The potential in the bonus is clearly there, but the guarantee of a jackpot win and the ability to upgrade both the prizes and which jackpot you can win add to the excitement of the bonus.

With a base game that’s not horribly volatile as well, with some medium its in the offing with some regularity thanks to the dragons flying by, this game is a balanced approach that can yield a lot of fun moments.

NG Slot had a couple of bonuses on the game at a $6 wager:

Brian Christopher played on a high limit version, which showed off the pay table information: