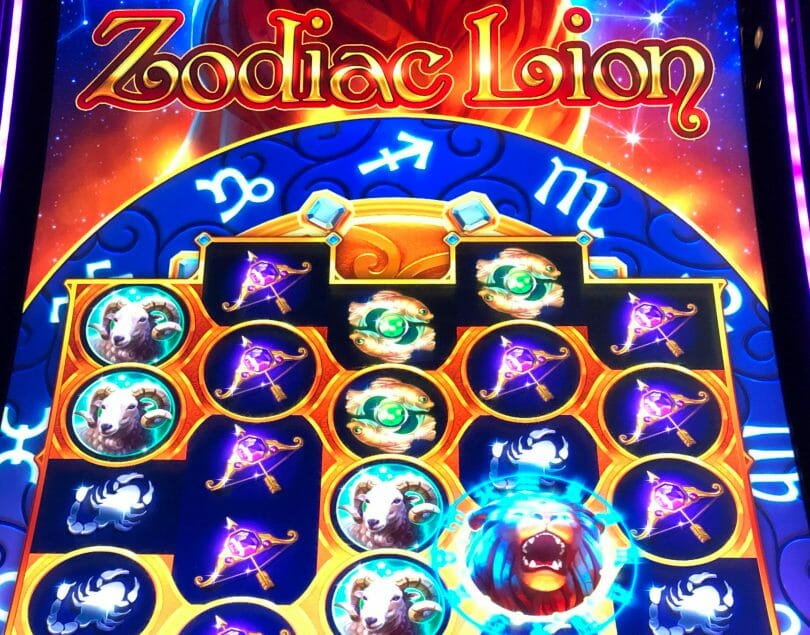 Game: Zodiac Lion
Manufacturer: IGT
Advantage play potential: Medium
What Makes it Special: You collect gold frames, which can lead to a cascade of wilds at once, but only if you have a set of gold framed reel spaces that are touching each other.

Zodiac Lion follows in the path of other games by IGT, such as Scarab and Star Goddess, where gold framed spaces can ultimately turn wild. This game makes it a bit more difficult to turn a bunch of spaces wild, but the potential is still there.

Zodiac Lion features an unusual 4-5-4-5-4 reel set with 50 lines and a 60 credit bet increment. The game also features a more/better bet, the Zodiac Wheel bet, which has 100 credit increments.

This ultimately works like some sort of combination of Scarab and Wild Pirates, where the connected spaces in Wild Pirates turn wild when one turns wild. If you have a clump that is disconnected from a space or spaces that turns wild, that clump remains. So you ultimately hope for the various gold frames to be connected before a wild hits.

The Zodiac Wheel is the more/better feature for this game. On any random spin, the Zodiac Wheel can come out and add gold frames to anywhere from 1-22 spaces on the reels that don’t have them.

This doesn’t instantly give you any pays, but it can connect clumps of gold frames that otherwise wouldn’t convert because they’re not touching.

A Lion Spin bonus can be triggered if three or more Lion Spin symbols land in reel spaces where a gold frame is present. You earn one spin for each Lion Spin symbol that’s captured in a gold reel. They don’t always appear, and when the opportunity to bonus exists a suspense spin will happen.

Once triggered, the wheel behind the reels spins for each Lion Spin, landing on a number between 3 and 22, which will determine how many spaces will reveal a lion for each spin. Like the base game, if a lion lands in a space without a gold frame, it will add one. If it lands in a space with a gold frame, it and the spaces connected to it with gold frames will also turn wild. The combination of lions and wilds is where some of the bigger pays are possible, and with enough spins repeated pays.

You cannot retrigger the bonus in this particular game. The gold frames you collected before the bonus carry into the bonus, and the frames left over carry out of the bonus.

There’s two aspects to the Advantage Play opportunity of this game, which is a bit unusual.

Unlike Scarab, there’s no set number of spins before the gold frames turn wild, so if the game gets stubborn and the lions don’t show themselves for awhile, you could spend some money trying to get the lions. As such, this isn’t as good or guaranteed an advantage as some of the others, but with enough gold frames in the right places, it can be worth a try. And with 10 bet options, there’s plenty to check on this machine.

[UPDATED 8/1/20:] A regular reader of the site shared another scenario to watch for that I haven’t encountered, but makes perfect sense. Because of the way the bonus round works, it can drop a lot of lion heads on the last spin of the bonus. That means a lot of frames will instantly be populated when heading back in to the base game. But if you look at it visually it may not be obvious.

He shared this example, which shows 10 lion heads on the last spin of the bonus that didn’t connect with a frame. But we know those 10 will now become frames, which is a considerable portion of the slot reels already seeded. Placement of the heads, and number left behind, will determine the potential value, but it’s another scenario worth looking for, which may not be so obvious.

Here is IGT’s game play video for the game:

RandomSlots comes through as usual with a video featuring an explanation of how the game works, as well as features pictures of the pay tables: