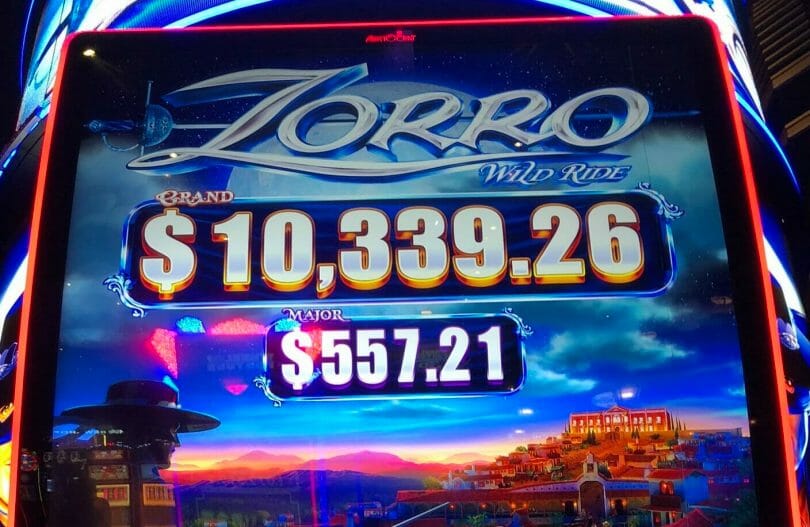 Game: Zorro Wild Ride
Manufacturer: Aristocrat
Advantage Play Potential: Medium
What Makes it Special: Wild Ride feature expands the reels; each time at least one wild lands in reels 2, 3 and/or 4 the wild locks and sticks around for another spin. Rinse and repeat until no more wilds land. Free spins is 8 free games with the same locking wild mechanic. Some wilds can be x2.

Aristocrat is known for more volatile machines, and licensed games don’t tend to be easy to begin with, but Zorro Wild Ride is one of those games that bucks the trend, at least in my experiences with it playing it on my most recent trip to Las Vegas.

This game was in a number of casinos in Las Vegas when I visited, but as of this writing I only could find one slot channel video from the game live in casinos. So I’ve also included some other clips for now.

It starts out as a 30 line game, with a 5×3 reel set. The bet increments are 50 credit steps, not a bad arrangement for a licensed game.

The reel set has a mystery symbol component that selects a symbol each spin to fill certain spots on the reels, which can amp up pays if they line up.

Like many modern games there is a jackpot progressive feature, a random feature, and free games. The variety keeps things interesting, but yet the game is not particularly volatile relative to other Aristocrat games.

The namesake random feature for this game is the Wild Ride feature, which comes out with pretty good regularity. The feature starts by extending the reel set to a 5×4 set with 40 lines evaluated. If a Zorro symbol lands in reel 2, 3 or 4, it will lock as a wild. Sometimes it will be a x2 multiplier wild. In rare cases it can be a Jackpot Bonus symbol, which converts to a wild upon completion.

Then, you initiate the next wager, but the feature continues. If another Zorro symbol lands in those reels, it, too, locks as a wild. Then, another wager, and another spin. As the wilds accumulate it can add up quite quickly. But unlike most features, you have to keep wagering to keep the feature going.

As such, this is a different sort of persistent state arrangement as it sticks around only until the feature no longer is maintained because no more wilds landed and locked. As per normal, each bet level has its own set of reels.

If either progressive is capped, like other Aristocrat games with this model (such as Lightning Link’s Major jackpot) it will continue to accrue under the hood, and will reset with that accrued amount added on to the next one.

Three or more coins trigger eight free games. The free games is effectively a Wild Ride feature for 8 spins, with wilds locking and staying for the rest of the bonus just like before, with the chance for x2 and Jackpot Won symbols as well.

The free games can retrigger, with 5 additional free games if collected. As you can imagine the later spins are where the real action happens, if it is going to happen, as the wilds collect and build up.

The Wild Ride feature is a persistent state feature that continues with each additional wager placed as long as another wild locks. This can be another one of those scenarios where people leave wilds behind.

You can tell if there is a feature left behind because the Wild Ride logo appears above the reels and there are flames emanating from the reels.

Some less savvy slotters may not understand this additional wager format to continue the feature, Wild Ride features may be left behind while still in progress. Because the wilds, reel height and lines played are “saved separately” for each bet option, you can check to see each bet level.

The fact the game has multiple denominations (at least where I saw it implemented) means a good number of options to check.

Here is a video from King Jason Slots featuring the game and all of it’s special features:

Here is the Aristocrat promo video teasing the release:

And here is a G2E preview video from RandomSlots: