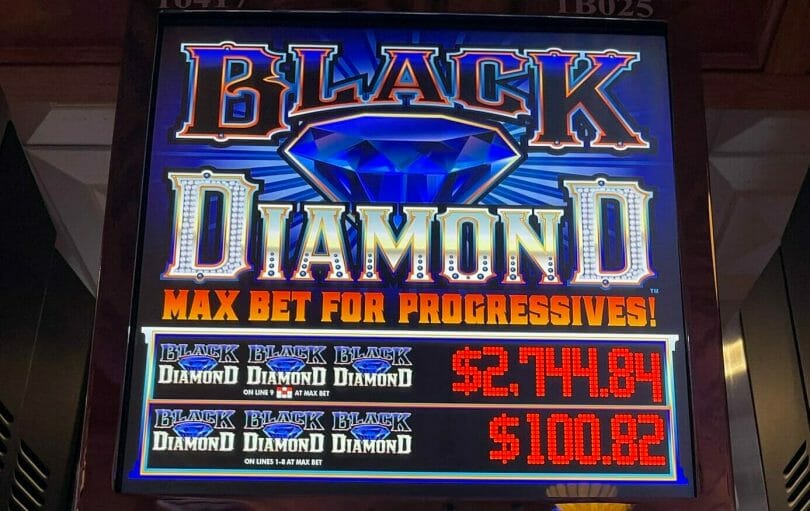 Everi has an impressive line of mechanical reel slots with various opportunities to win big prizes. One such example is Black Diamond, which only has two progressives, but one of the twists is the game is generally set up as a 27 credit machine.

Even at quarters that’s a bit rich for my blood at $6.75 a spin, but while playing at Delaware Park I found it at dime denomination, bringing the game down to a $2.70 bet, which I gave a swing.

Like many Everi mechanical reel games, this is a nine-line version, with the 3x bet multiplier yielding the 27 credits. The pay table features a standard mix of bars (which pay mixed), 7s (which also pay mixed), and the Black Diamond symbol, which serves as a wild.

Some symbol are watermarked with a 2x, 3x or 5x multiplier, which can bump the line pays up (which at max bet are already tripled from what you see here). Hence you get opportunities like the above, where I had a 100 credit line hit, x5 with the water mark, x3 for the bet multiplier, which yields 1500 credits, or $150 on this machine. not bad for a $2.70 bet!

Another Everi standard is progressives based on the wilds lining up, and on which line. I managed to pick up the lower progressive on line one, which was another $100 win on the machine not long after that line hit.

The game is pretty active; I got a number of other decent line hits while I played, which kept things going for awhile. The multipliers do come out and line up frequently enough that they can be helpful. It certainly has some volatility in it (I initially was getting eaten alive before things started to get moving) so it can be a bit of a ride, but these games tend to have that in them too.

The game’s enduring popularity has led to some variations and extensions to the brand over the years, but the original still gets the job done quite nicely!

KURI Slot played this at quarter denomination at max bet to great success:

AKAFUJI SLOT played the $1 denomination version and got a high-limit jackpot!