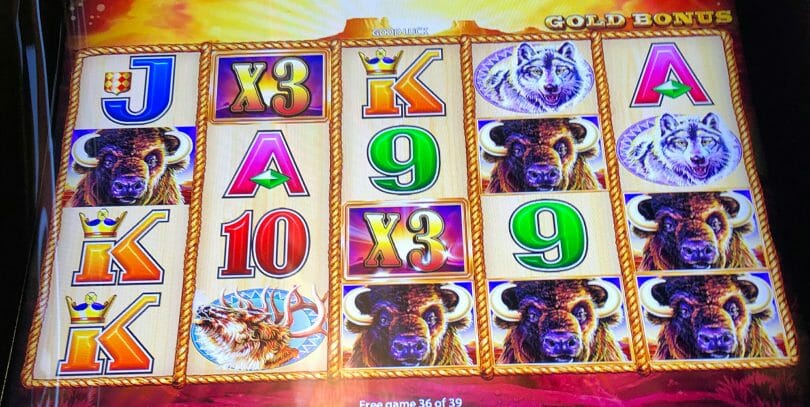 Reader Greg had a pretty straightforward question around machine payouts, particularly around the idea of jackpot handpays:

Hello, I’ve been playing the Buffalo Gold game for years, love it 4 sure, but in years of playing it the most I’ve ever won was 650.00 and at the casino I go to a lot I really never see anybody winning much on that game. Can the casino set it never to pay out very much ???

Greg, via the comments section

Hi Greg, and thanks for the question!

Casinos can choose a payback setting on a game to determine its payback over time, but such settings won’t disable a game’s ability to hit a handpay entirely.

You don’t mention how much you’re betting, but if you’re at the 60 cent level, for instance, $650 is more than 1000 times your bet, which is a rarity on a slot machine regardless of game or design. Of course, betting more, such as a $3.60 max bet seen on many versions, that would be a 180x win, which while impressive is not nearly as high; it would be a bit more unusual to not exceed that level despite playing periodically for years.

The game’s upside potential largely falls in the ability to upgrade enough gold heads, and the 15 gold head club is sort of a unicorn in the casino world with people having seen it, but it being exceedingly rare, so that may explain in part why you haven’t seen hits above it, but they’re out there.

Because of the volatility of the game, that means it’s a lot more likely to see smaller bonuses of under 100x, although that’s going to be the case with virtually any slot – breaking 100x is a pretty unusual event, and breaking 1,000x is a very rare thing.

I bet if you look around your casino’s big win photo library wherever it may be found (Facebook, website, and so on), if you dig through enough you’ll see the handpays on that game. I’ve witnessed someone in person getting a couple thousand on a 60 cent bet on one thanks to the 15 heads and a lot of retriggers, so if you get far enough along it can be quite lucrative… but getting there’s the hard part.