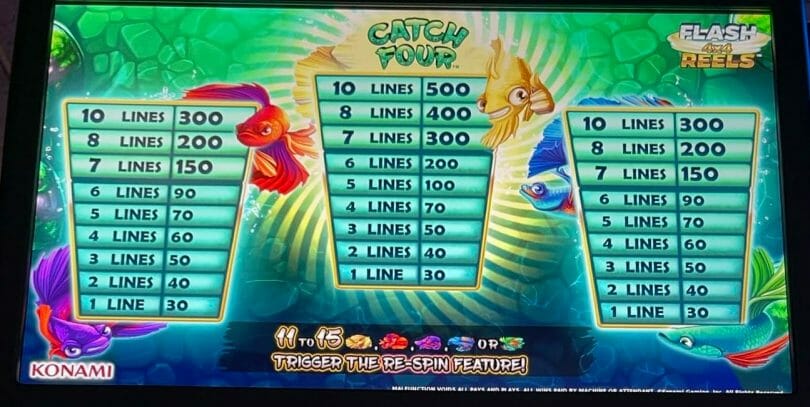 Manufacturers have been stretching their creative muscles to introduce more unique games with an aim to broaden what can be found on a casino floor. I finally got to try one of Konami’s such efforts, a game called Catch Four.

The game features a 4×4 reel set, so unlike games like Lightning Zap or Crush, it does feature reels. Each spin, one of five fish symbols is designated, and you either land a fish or you land a blank space.

If you land 11 to 15 fish, a respin feature is awarded. The symbols you landed lock into place, and the remaining reels respin.

If you land one or more symbols in open spaces, you are awarded another respin, and that continues until you either don’t land any more symbols, or you fill the whole set of reels.

The pay table pays you based on the number of four of a kinds you achieve. There are 10 possible four of a kind lines that can be achieved (in other words, this is a 10 line game). On a 60 credit bet, a full screen will pay you up to 500 credits, depending on the symbol that appears.

That doesn’t sound like much, you might say, and you’d be right. The missing ingredient is the multiplier feature. Certain spaces can be assigned with multipliers. If a symbol lands where a multiplier is, it will multiply all wins by that multiplier. The multiplier can go all the way to 144x, so under the right circumstances it can get pretty sizable.

During my session, I only saw multipliers a handful of times, and only had the respin once. So like any slot, especially one designed by Konami, it has the potential to be tough, but it’s fun to see games that attempt to break the mold and shake up what is expected of a slot machine.

With only five symbols and one present each spin, and just 10 lines to play, it does shake up the model while still keeping within the familiar reel construct.

Here is a video from RandomSlots, which incorporates the paytable and features respins:

TheBigPayback also got a session on this game, including a couple of full screens with multipliers: