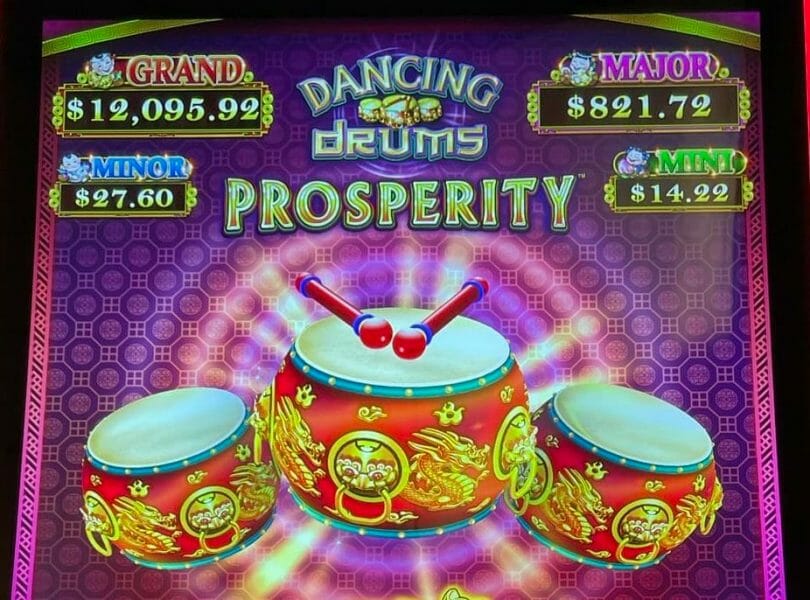 The popularity of Dancing Drums endures, and of course that has led to a proliferation of sequels.

One of the more popular of the sequels is Dancing Drums Explosion, so it makes sense that another game that plays with the same concepts would come out as an additional sequel.

This means instead of the 88 cent bet increments with all gold symbols active on the original, each increase of the line multiplier is at least 100 credits, going from 88 credits to 188 credits for 2x, 288 credits for 3x, and so on, and then even more of a leap when you get to the 10x level with a 1,000 credit bet.

In addition, compared to the original Dancing Drums, the premium symbol pays on 3 of a kinds and 4 of a kinds have been chipped down pretty significantly, up to 50 percent depending on the symbol and how many. 5 of a kinds are left alone, but those are of course more rare.

What does this mean? The game’s putting more into the features and bonuses, classic slot sequel design.

In this case, like Explosion, there’s a special version of the bonus symbol, the triple drum. When it appears, you get a revised bonus round selection compared to the standard Dancing Drums, as in each spin the reels can be one of three height sizes:

This differs from the guaranteed taller size in Explosion, but they allow the reels to go even taller than that game. It’s another way to up the volatility. And of course mystery, which lets you have it randomly select from one of the four game counts and reel sets, still exists for even more volatility.

During the base game, there is also the random chance for the reels to grow. The chances for this increases with higher bets, with the best chances at 588 credits and 1000 credits.

During some play time on the game, I got a bonus (standard one) and opted for the 4×5 and 10 free games. Despite retriggering no less than six times, I only managed a 25x or so bonus, which felt a bit disappointing. I attribute that to the reduced line pays as I was hitting, but not getting any five of a kinds.

One other thing – the progressive pick is similar to the standard Dancing Drums, but a bonus pick can be awarded to award a second progressive. This enhances the prize in that bonus, similar to how Explosion gives you the chance to have an upgraded set of progressives, but just handled differently.

Most of the money certainly seems to be in getting the bigger reel stacks in the bonus, which for higher betters is of course easier to accomplish given the increased bets and money pushed that way. Lower betters may prefer to stick with the more classic version, where the line pays will be stronger and give you more of a chance to survive to a bonus.

Here’s a video from TheBigPayback on the game:

Slotaholic got a series of bonuses and progressive picks on the game: