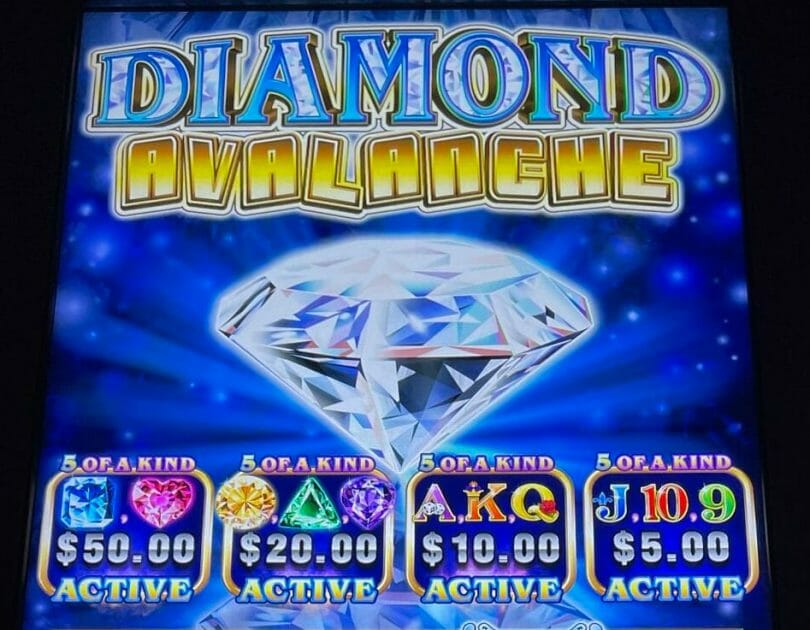 I’ve spoken in the past of my enjoyment of games that upgrade five of a kind pays, such as Fairy’s Fortune. On a recent trip to Rocky Gap, I tripped across a game by Ainsworth I can’t recall playing in the past, even though it’s an older game: Diamond Avalanche.

One thing I liked about the game was it was a $1.50 max bet game with 30 lines where I found it; similar to older Quick Hit games, that’s a nice sweet spot for lower betters to have a swing at some bigger opportunities. 40 line and 50 line versions push the max bet to $2 or $2.50, but is still not massive compared to what’s out there today.

The game is a 5×3 reel set, pretty standard for a video slot.

Another was that it offered the ability to win bonuses for five a of a kinds, so you not only got the line payout, but the bonuses depending on which symbol it was. Better, you could win the bonuses multiple times if you had multiple five of a kinds. The flat bonuses scale with bet and are paid for five of a kinds with wilds.

At max bet, if you get five of a kind with no wilds (very hard to do, in all honesty), you win a progressive. Otherwise, you just win the flat jackpot. So this is definitely one of those times where you need to max bet to qualify for all pays, or you’re leaving money on the table, even if it’s on the rare side.

The reality is the bulk of the pays are in the five of a kinds, so if those are flowing, you’ll do well in a hurry, and if they’re not, you won’t. At one point I got two five of a kinds of the top diamond, which paid over $100, but $100 of it game from two $50 bonuses for that five of a kind. If I had managed it without the wilds it would have been an over $2,000 grand – not too shabby.

Three or more bonus symbols would trigger the bonus, which despite a number of sessions that visit I wasn’t able to manage a single one. You can retrigger once, which adds five more free spins. The reel set expands to 5×9, which opens up a lot more lines for chances to win.

During the free spins, the diamonds now take on multipliers. The multipliers increase based on what spin you are on in the bonus, as follows:

This is presumably to rebalance things for the bonus and the retrigger conditions, and of course to remove the bonus symbols once retriggered, and probably to weight pays even more to 4 and 5 of a kinds in this format, along with the taller reel set that is used for the free spins. The progressives and five of a kind upgrades pays only in the base game, and do not pay out in the bonus.

Overall this game was a lot of fun, and at $1.50 a spin gave me some runway to play for awhile and experience some of those bigger bonus pays (with wilds, since I didn’t win any of the progressives while playing).

I had one incredible session out of my attempts, where it was hard to know when to walk because it kept paying, but eventually I moved on well ahead of my starting stake. Other times I was down but still got good play – which I like out of a slot machine.

While not easy to find, definitely look for it. And it does have clones with different theming but the same structure so look for the tell tale bonuses for five of a kinds to know you’ve found the right game.

Here is a video from TheBigPayback featuring a $2 max bet:

Slotaholic played the game as part of the Time Bomb series, and later in the video got multiple progressives, including the Major: