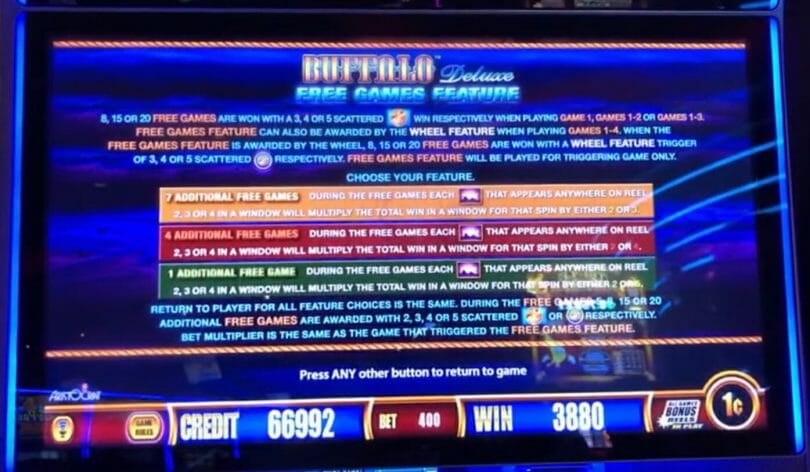 Here’s one that sometimes trips people up – if a paytable advertises all bonus options features the same Return to Player, does that mean your choice doesn’t matter, and that all bonus options will pay the same (in effect, predetermined regardless of choice?

The question came up during a Brian Christopher Rudies live stream, and Brian pulled up the paytable with the image you see at the top of the article (thanks to Brian for permission to screencap).

The confusion comes of the use “Return to Player.” That phrase is an alternate term for a machine’s payback, the opposite of which is the casino’s hold. This is a long-term goal. No one bonus or spin will guarantee that exact percentage – otherwise every spin you would lose a precise amount, no handpays, no dead spins.

For those who read my piece previously on bonus volatility, you may know where this is going. On Class III/Vegas-style slots, free spins are also governed by the RNG, so the outcome is not determined until each spin is up, just like when you hit the spin button during a regular spin. So the choice in these scenarios does have an impact.

Buffalo Deluxe is an example of a game that offers a bonus option that’s effectively three options that are varying degrees of volatility. On the left you have 15 games with smaller multipliers; on the right you have 9 games with bigger multipliers.

More games means more chances to win, but when a multiplier lines up you only get a x2 or x3 possibility. So the pays and the ability for the multiplier to build upon itself (you can stack x3 x3 x3 multipliers in a best case, or x27) are constricted by that limitation, balanced out by having more spins.

So in any given bonus, the 15 free games will probably pay out in a smaller range, while the 9 free games will be feast or famine on what is a volatile game already. But once in awhile those massive payouts will happen on 9 games, and those bonuses will be huge to players who get them.

In the long term, both bonuses will pay the same percentage back to the player. But they each play out in their own way, and choosing one over the other doesn’t mean you’ll get paid the same. The 9 spins bonus has the potential to pay a lot more, but also has the chance to whiff more often. The 15 free games is more smoothed out, with more smaller pays likely.

All of the above only applies if the game is a Vegas-style slot. The moment you shift to Bingo machines, Historic Horse Racing games or VLT/VGMs that aren’t governed by an RNG, the bonuses are predetermined, meaning that it knows how much you’re going to pay.

However, you may notice many games are missing in those jurisdictions; this bonus choice simply doesn’t exist in those markets. It’s one thing to know you’re going to pay a certain progressive and have that be predetermined; it’s another to make people think they can swing for the fences for a more volatile bonus, but it’s just going to pay the same amount either way. Slot manufacturers would rather not mislead the public in thinking they had some control over their free spins, so instead, you see more selective game releases in those markets.

This is why you generally won’t see things like Wonder 4 Jackpots in a Class II/Bingo machine scenario. Instead they make distinct themes of Buffalo for Class II, like Buffalo Extreme, or convert ones where there’s no bonus choice, like Buffalo Gold.

Which bonus would you pick on Buffalo Deluxe? Share in the comments!