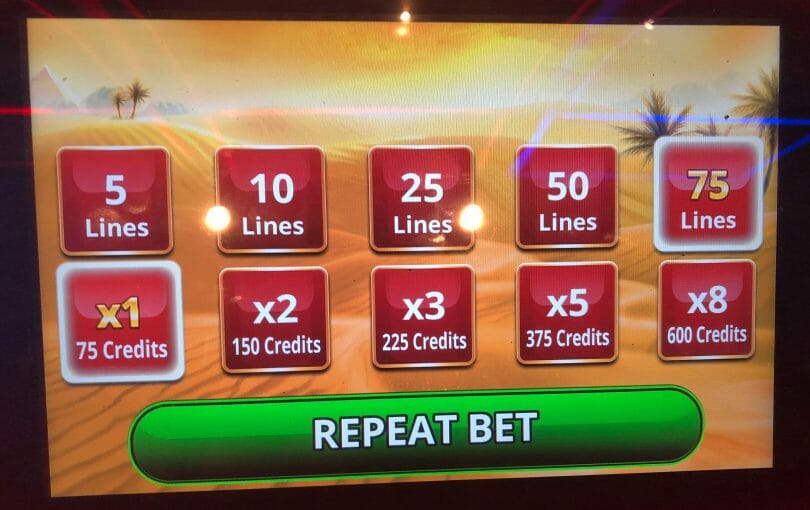 In our previous piece on extreme low rolling, we spoke about games that have lower bet options, such as 5 Treasures, that let you still take advantage of many of the game’s features at a lower bet level. You lose out on some things, but the general game still holds up.

Another aspect that can let you bet lower are games that give you the choice of how many lines you wish to bet. Casinos are increasingly introducing games and game configurations that take away this choice, but some don’t, and some games are more welcoming of this than others.

Nowadays, many bet panels look like the above – 5 bet levels, linking to the multiplier for line hits, but no ability to choose how many lines you’ll play. This is also true of all the Link-style games where you are forced to bet in for the feature as well. This means a higher minimum bet on a higher volatility game.

A lot of the older games, and certain newer games, still give you the opportunity to choose how many lines you wish to bet. Above is an example of the Golden Egypt, sequels and clones bet panel. Within a persistent state reel set, you can choose how many lines you wish to play. Lower lines means less line hits with the lower number of lines, but also a lower bet level.

Some players like to have a higher line bet on a lower line count. You can bet 25 lines x3 and get the same 75 cent bet as 75 lines x1. You’ll have 1/3 of the line hits compared to all lines in play, but when you do they’ll pay 3x more. This is another example of a volatility choice – you’re reducing your hit rate in the hopes of bigger hits.

One thing you might have noticed is the same game may exist at different casinos with different line configurations. A game like WMS’s Mystical Unicorn could be seen with 30, 40, 50 and even 100 lines. This is because the casino has configuration options that can let it choose what line options it wishes to offer, or if it will even offer line options at all.

When in Las Vegas a couple of months ago, I noticed players playing Buffalo Gold but with a blue background instead of the standard orange/gold one. I had noticed that they were playing without the Gold feature, which I thought was odd, as I hadn’t seen it before. Turns out, the manufacturer designed it with lines and the ability to activate the gold feature as an extra bet (without it it basically plays like classic Buffalo).

At my home casinos, that option doesn’t exist at all – you have the full line count and bonus bet all enabled at all bet levels. So it’s 60 cents or nothing, where in Las Vegas you can bet 40 cents to remove the Gold bonus, or even lower the line counts.

Some games can be configured differently side by side – at one casino I saw one game with line choices on the machine to the right, and one line choice (all lines only) to its immediate left. So it helps to look at the games.

This is why most machines have two rows of buttons – the top row was historically for line bets, although now it’s been usurped by features and other capabilities that more modern games have.

CTSlotters gave Stinkin’ Rich a time at less lines. This game it is important because if you trigger free spins on less lines, the free spins opens up all lines anyway!

Do you play less lines? Do you seek out versions that give you more choices? Share in the comments!