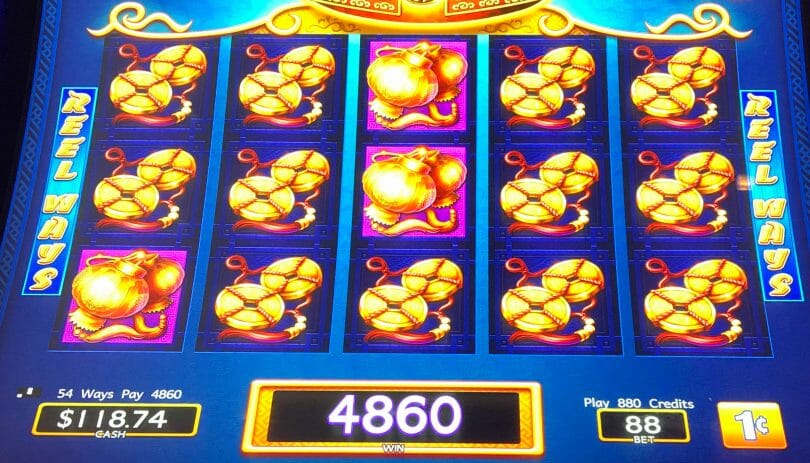 Dancing Drums is a popular casino slot machine, itself following in the footsteps of games like 88 Fortunes and 5 Treasures, and as such it’s not surprising that it saw a sequel of its own, Double Blessings. This sequel came before the other, more direct sequel, Dancing Drums Explosion, which was reviewed here earlier.

Unfortunately this game, like many sequels, falls into a sequel volatility trap that makes the game even harder than its predecessor, itself a somewhat tough game at times. That doesn’t mean Double Blessings doesn’t have its fun moments, but players who are fans of Dancing Drums and are expecting a similar experience on Double Blessings should understand the changes and what they do to the game.

First off, let’s talk about what’s similar. The betting structure, with gold symbols on top and line bets on the bottom, carries over cleanly from its predecessor. Based on the number of gold symbols, you activate higher pays for the gold symbols, and activate access to the progressives. Critically, you also activate which symbols can be stacked in the bonus round, a big change that will impact bet strategy on this game. But we’ll talk about that in a moment.

The way you trigger the progressive picking screen remains the same – land a wild symbol and have at least two gold symbols active and you can win your way to a progressive in a predetermined bonus screen. The gold symbol betting works as follows:

Now, for what’s different. First off, the pays for the non-gold symbols have been increased. That may seem odd because it means when you have a gold symbol turned off you’re getting paid more than before. The reason for this will also be clear when we get to the bonus round.

Take the hit shown at the top of this article. On Dancing Drums that same win would be $54.00 as it’s a 54-way pay at $1.00 per line, vs. 90 cents on Dancing Drums. That’s a 10 percent reduction for the same wager. This adds up over time, and is not unlike a video poker machine that waters down some pays and boosts a few much more rare ones – you’re upping the volatility of the machine to make certain scenarios more valuable but watering down the rest.

Now let’s talk about that free spins bonus. It starts with a trigger with a minimum of three bonus symbols or wilds starting with the left most reel. This pays identically to Dancing Drums.

The bonus is a set 8 spins, unlike the volatility choice of Dancing Drums. The reel set defaults to 5×3, but the twist is that small symbols can appear on the reels, and if they appear and match with other symbols to fill in or extend a line hit, they will stack two additional symbols matching the symbol in the dot above the 5×3 reel set, a double blessing as it were.

Given you can get multiple reels extended, this can lead to a pretty stacked win, far beyond what the base game can offer, and as such is likely why the pays were tinkered with – the bonus is designed to potentially carry through much larger stacked reels when the right scenario comes along.

Unlike Dancing Drums, where you have to select taller reels, and then your spins are reduced, this is based off a standard 8 spin set. So effectively the base game has been made tougher to allow for more potential in the bonus.

That said, this makes the bonus more volatile in turn because you have to get those symbols in the right places to get an exceptional hit. It’s possible to have a dud of a bonus even with this scenario.

Making it even more volatile is the fact that the only active symbols that can lead to expanded reels are the ones activated as gold symbols. So if you’re betting one gold symbol, your bonus will be 5×3 for 8 spins, compared to a 5×3 grid with 15 spins and one gold symbol active on Dancing Drums. And don’t forget the top pay is reduced 10 percent. They really want you to bet 88 cents a spin here.

Higher bets, tougher base game, more volatile bonus… this has all the makings of a tougher game than Dancing Drums. I’ve had some amazing hits on it, and I want to like it, but because it takes a tough game and makes it tougher, I don’t play it much. I tend to only give it a go when I’m willing to risk $100 at 88 cent bets because it’s very easy to bomb out early if you don’t put enough on the line.

While I’ve certainly had that experience here and there on Dancing Drums, I don’t encounter it with the same frequency as Double Blessings, and as such I tend to stick with Dancing Drums more often than not.