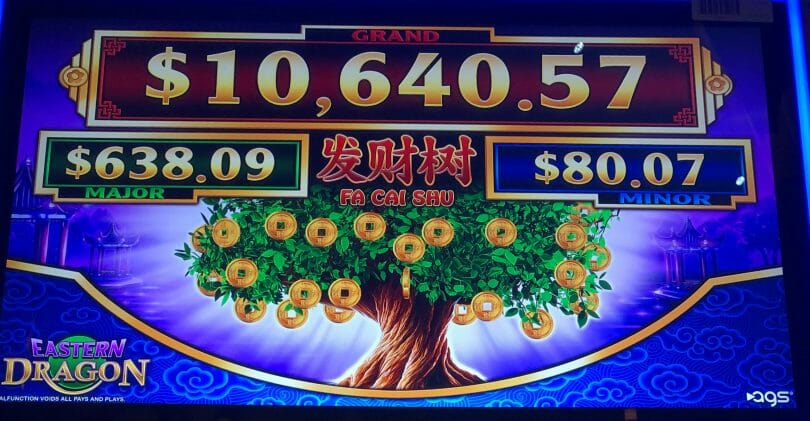 Rightly or wrongly, I have it in my head that AGS games are tough. I can’t recall seeing a game of theirs under 50 cents as a minimum bet, and many are 80 cents or 88 cents. Lots of them are in the format of 88 Fortunes/Dancing Drums, requiring bonus symbols lining up from the left, are all ways pays, and so on.

Despite all that, I’ve been giving their games a bit more play as of late, and frequently enough I feel like I’m rewarded well for doing so. They may be high volatility, but they pay.

One game in particular I’ve come around to liking a lot is Eastern Dragon.

It breaks their model in a few ways:

One of the key features of the game is the nudge feature on the wilds, which can happen on a base spin whenever a wild lands. When it does, any wild symbols on the reel can nudge to fill the full reel. They appear on the middle three reels, so this can lead to some pretty impressive pays fast.

Similar to Money Frog, reviewed last week, the wilds are pretty important because the pays jump as you get to 4 of a kind and 5 of a kind.

Wild symbols in the base game also throw coins up into the tree, and any one of those can trigger the jackpot bonus. You can win one of three progressive jackpots, each with a free games bonus attached to it as well, or you can just win the free games. So the jackpot pick becomes another free spins entry point at a minimum.

Eastern Dragon is part of the Fa Cai Shu series of games, of which there are four in all, and all have something special around the wilds when they land. But Eastern Dragon is the one I’ve played the most, and had the most success.

Here’s RandomSlots with the pay tables and a good game play video:

Here is a video from This Week in Gambling, which has an overview of the game, and shows an example of the Jackpot Bonus:

Slotlady also featured the game, starting at 5:21, in this video: