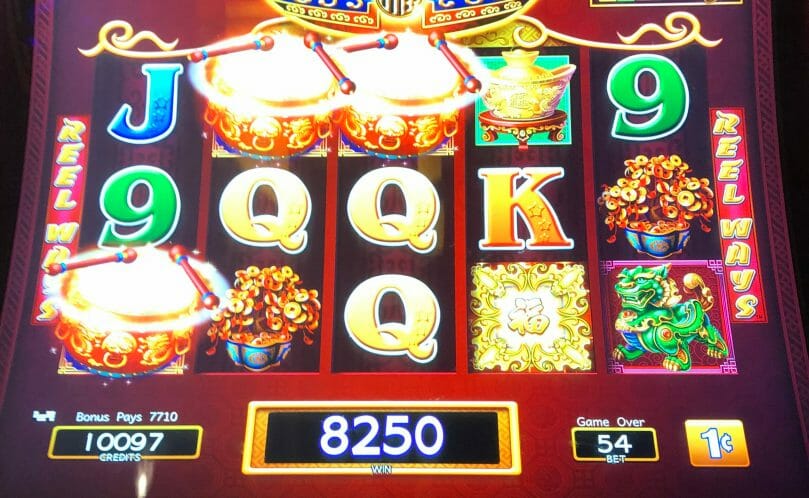 Awhile ago I shared a post around 5 Treasures and how you can extreme low roll at 8 credits if you really want. As a sequel to that post, I thought it would be fun to take a look at Dancing Drums similarly.

I’ve talked about the betting structure on Dancing Drums in my tutorial on the game, but to quickly recap, there’s two bet levels, the gold symbol bet choice and the line multiplier bet choice. Low rollers can heavily reduce their wager by simply opting for one gold symbol.

There’s a couple of consequences there – first is you lose access to the progressives, as you must be betting at least two gold symbols to unlock the first of the progressives, the mini. If you wish to have access to the mini it’s a small increase from 8 credits to 18 credits to get it. Adding the minor requires another 20, a total of 38 credits, to activate the third gold symbol.

The second consequence of going down to one gold symbols is the premium symbols are all reduced pays, because they’re no longer gold. They still pay something, just not as much as with the higher wagers.

That said, you’re saving 80 credits and going from 88 credits to 8, so your volatility will be heavily reduced. And you still have the gold coins, along with the poker symbols, that pay their normal amount.

What you can do with some/all of that savings is increase your line multiplier. Effectively the gold coin becomes your top paying symbol. And at 8 credits per line multiplier, you can max out the gold pays with a 10x line multplier and only pay 80 cents a spin.

The game remains plenty volatile, but without playing for the progressives your pays are all in the line hits. And the coins are stacked with enough frequency that you can easily get 100x your bet wins with only half the spaces with coins.

One other big aspect of Dancing Drums on low rolling is that, unlike some of the other games like 5 Treasures or Double Blessings, you get the same bonus options with the same bonus presentation regardless of bet level.

You can choose from the same five options with the same spin counts; the pays are just evaluated based on how many gold symbols you have active. So you can still hope for that epic line hit of gold coins in the bonus.

For those who don’t like betting high, it’s a game that offers some fun rewards even at lower bets, and a chance at solid hits. Having a reasonable chance at 50x or 100x on any bet level makes the game quite fun to play even at an extremely low bet.

King Jason Slots and I were in Vegas at the same time back in December, and while he was in the high limit room playing and filming some content, I was sitting next to him playing Dancing Drums at 80 cents a spin, which was what 8 credits at a dime denomination allows. I got a solid bonus that Jason filmed and shared, as you can see starting at 14:24 in this video: