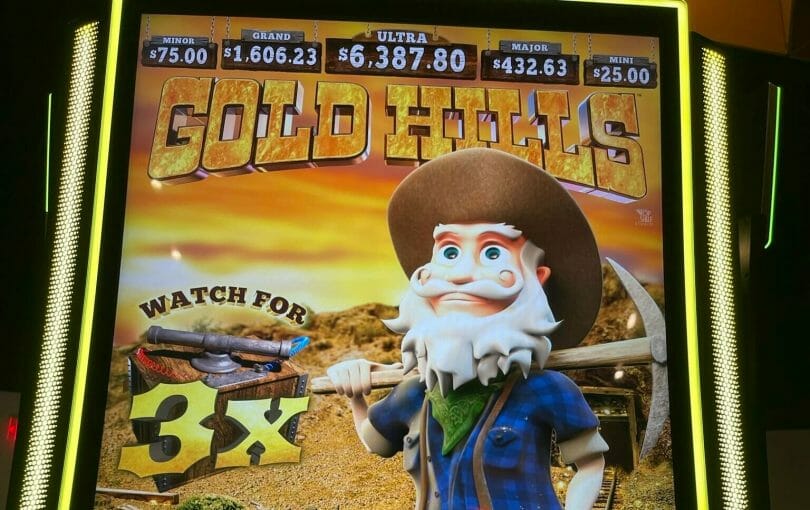 The Gold Hills series is another entry in a line of video slot machines this year from Everi, which has been getting aggressive in recent years. I first saw the game last year at G2E, and the game was among those that featured a Frenzy Mode which shifts gears during gameplay to go after different goals.

There are two versions of the game; I spent my time during recent sessions exploring the Prospector Pete version, but they have a second version, Lucky Mule. The games are similar aside from the bonus/free spins feature.

Something unique about this game is the bet panel has three bets all with 1x line pays. The three on the right are 1x, 2x and 4x line pays with the maximum number of nuggets. So going from 75 credits to 125 credits doesn’t up the line pays, just the amount of nuggets.

On any base game spin, a plunger on reel one allows the collection of gold nuggets (the cash on reels element for this game) as long as they appear on connecting successive reels. This is similar to the Aristocrat Wild Wild games except only a symbol on reel one is required.

That symbol is a wild symbol, and can also come with a 2x or 3x multiplier, which multiplies all pays, including the nuggets (except jackpot nuggets).

The credit prizes on the nuggets increase for each successive reel:

An increased chance at credits on gold nuggets can happen when an explosion symbol appears on reel 1. At that point more gold nuggets are added on reels 2-5, with the same distribution of prizes as listed above. The chances of the feature changes based on bet, so it’s likely that “more nuggets” bet comes into play here.

Landing a Gold Run symbol on reels 1 and 5 triggers the Gold Run feature. It can also be activated when the game has no credits to effectively attract players and is available for three minutes when activated in this format.

A 2 minute Frenzy Mode is initiated on the individual machine. Gold nuggets appear above each reel. Mine carts are added to reels 1-5, and if a mine cart appears on a given reel, the credit prize above that reel is awarded.

The prize can be 30-6390 credits x the bet multiplier, as well as any of the five jackpots. Like the other modes, only one jackpot can be won per spin. The nuggets above the reels change with each spin.

You can still get the base game plunger feature or Mystery Credits Feature during the Gold Run Feature, which works identically, with the caveat that the nuggets above the reels do not contribute or participate in those aspects.

Getting the Bonus symbol on reels 1, 3 and 5 trigger the unique bonus for this game, the Lock and Respin Bonus. During this bonus, you start with five free spins. Any spin where at least one gold nugget lands, the nugget(s) lock and an extra free spin is awarded.

The plunger moves to reel 5 and is the only symbol in the reel along with blanks, and remains a four-high reel. The other four reels become individual reel spaces and can spin for those gold nuggets.

Anytime a plunger appears on reel 5, and at least one gold nugget is on reel 4, prizes are awarded from right to left. Like before, only prizes on consecutive reels are available, so if there’s any gaps, the prizes to the left of the gap won’t be awarded. 2x and 3x can appear on the plunger, and nuggets with credit prizes will be multiplied.

Since plungers can appear multiple times, it’s quite possible to win prizes multiple times, as they are awarded each time the plunger hits, and the prizes are on successive reels from right to left.

A lot of the money comes in around the various gold nugget features. $1.25 bet maximizes their availability, but pushes the coin-in up quite a bit to get there. As such, expect some swings on this game; my 100x lock and respin bonus seen above made one session a strong winner, while another session, despite a $40 plunger feature on the base game, was a losing session because that was about all I got.

Here’s the promotional video from Everi, the maker of the game:

Here’s a video with the pay table screens from RandomSlots:

TheBigPayback shows off all the features of this game: