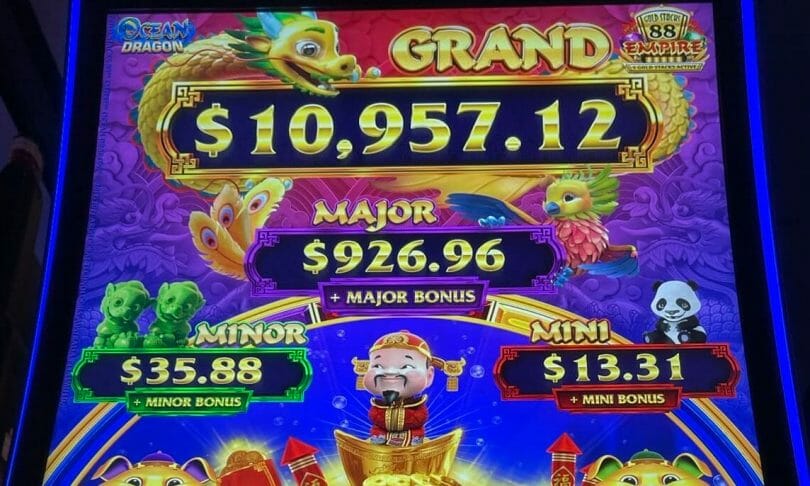 That was my experience anyway on the Ocean Dragon theme during a recent session on the game. All the building blocks are there, but the changes make the game tougher, and it wasn’t like Gold Stacks 88 was particularly easy to begin with (although I’ve had lots of luck on Turtle Kingdom).

The big change is the addition of a Good, Better and Best scenario. Best gives you access to more frequent features (because you need to bet at the Best level to have access to all the feature opportuities), but it comes at a pretty hefty price increase of 50 credits more times your line bet.

If that weren’t enough, this is another one of those three accumulator games that Aristocrat (the maker of this game) pioneered with Fu Dai Lian Lian. Choy is joined by two more characters, Prosper and Fortune. Each character can deliver a free spins bonus of 6, 10 or 20 free games.

This game features something a bit different, and similar to the Wonder 4 Boost series, where you can get symbols that can upgrade a standard feature to a super or mega feature, or a super feature to a mega feature. Upgrades also come with three more spins, so if they happen at the end of the bonus, you can still get some benefit out of it.

Of course, since you need the Best bet activated to have access to all three features to begin with, a mega feature isn’t possible unless you’re making that extra wager.

Bonuses can be triggered with three or more gongs (wilds substituting), standard for this series. The 3, 4 or 5 gongs mixed with wilds will trigger 6, 10 and 20 free games, respectively. But the bonus can also be triggered with a random wild feature on the base game as well. And any of those free spin combinations are possible.

Another addition is the wheel feature, linked to a gong with a wheel symbol when the bonus is triggered. Options include all four progressives, credit prizes and Start Free Games. Up to five spins of the wheel are possible, not unlike Buffalo Gold Revolution, with increasing credit prizes on each spin.

Winning one of the three smaller progressives of Mini, Minor or Major comes with a bonus prize, just like it would on the picking feature, so that remains intact here.

And that leads to the last feature, which is the progressive pick, which can come out on any wild symbol, and works identically to the standard Gold Stacks 88 progressive picking. It’s a predetermined pick, and you win bonus credits with the three smaller progressives when you win one.

Now, are those Better and Best features just boosting the various bonuses? No, in fact, as you do actually see boosted line pays on the higher bets as well, about 50% higher in a quick skim of the pay table. Of course, you’re betting more than 50 percent higher, so the balance of those improvements come courtesy of all those extra features.

There’s a lot going on, and of course the pay tables accordingly are a bit of a mess – 20 plus pages in all – but when you play the game it becomes pretty clear what’s going on. But expect a pretty volatile game given all the entry points into bonuses.

I played a pretty lengthy session and couldn’t manage a single bonus, which is unusual for me on a similar session on Gold Stacks 88. I got one progressive pick bonus and got the Mini, and I did notice the line hits being enhanced on that Best bet – you could see more substantial pays there. But without the bonuses, it’s really hard to keep up in the end.

RandomSlots gave the game a go, and called the game complicated, which includes the pay table:

The Slot Cats played both this version and my favorite of the standard ones, Turtle Kingdom, to see which worked out better for them:

NewEnglander82 played the game and described it as weird: