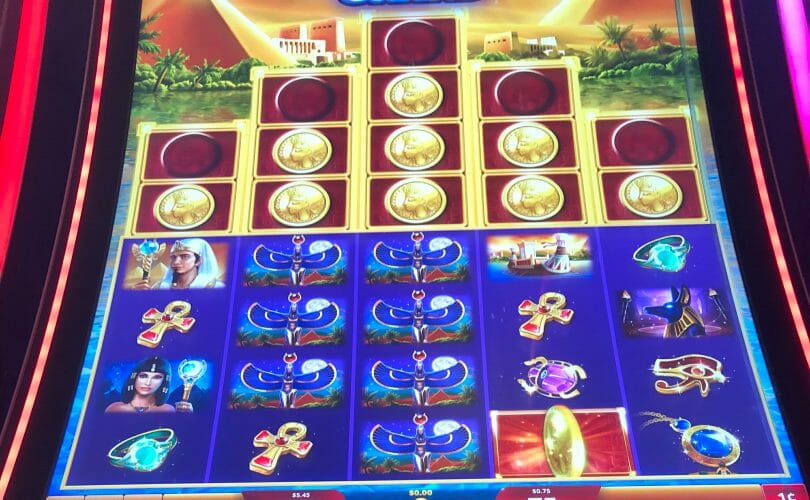 Game: Golden Egypt Grand
Manufacturer: IGT
Advantage play potential: Medium-High
What Makes it Special: The wild reels stick around longer in the middle than its predecessor, improving the chances of multiple wilds being present during a game.

The Golden Egypt format has been successful for IGT, leading to clones, other games using the persistent state wild reels format, and even a Wheel of Fortune game leveraging the basic game mechanics.

Golden Egypt Grand doesn’t attempt to tinker too much with what’s working – the main game difference is in the coin collection – the middle reels require more coins, and in return the wilds stay around longer. And that can make for some pretty amazing Advantage Play opportunities.

In just about every way Golden Egypt keeps things similar to its predecessor where it matters. So, for instance, you have the five bet levels, and the ability to choose how many lines you wish to bet. At each line bet level you have a different set of persistent state reels, just like the previous game.

As such, it has the potential to be a bit more volatile than its predecessor, but also have the chance for bigger win potential with the reels being more persistent in the middle more often. This also shifts the Advantage Play subtly.

Like its predecessor, it’s about the coins and the wilds. The ability for reels to stay around longer means the Advantage Play potential improves here over the original Golden Egypt.

Players who leave behind wilds are giving you a better advantage. Meanwhile, the coins remaining in each reel is the secondary advantage. The photo below in the Free Spins bonus section is as good as you can get without any live wilds – one coin in each reel will activate a wild reel for 2-4 spins.

Where the general thinking is more coins to the left in the original Golden Egypt was the benefit, the benefit shifts a bit towards the center reels in this version. If you have a lot of coins in reels 2-4, which will stick around longer, you could get a possible middle-3 wilds scenario which gives you guaranteed 4 of a kinds across 75 lines… pretty awesome.

As such, the first four reels can all be important, and the more coins across them, the better. Reel 1 can still be valuable with its 2 wild spins potential, but it will evaporate faster than the middle three.

The wild reel(s) are randomly positioned each spin, so there is no guarantee of a win on any of the bonus levels, but of course more wild reels increases the potential, but at the cost of less games, and hence the difference in volatility.

TheBigPayback featured Golden Egypt Grand in a video, which also includes a bonus: