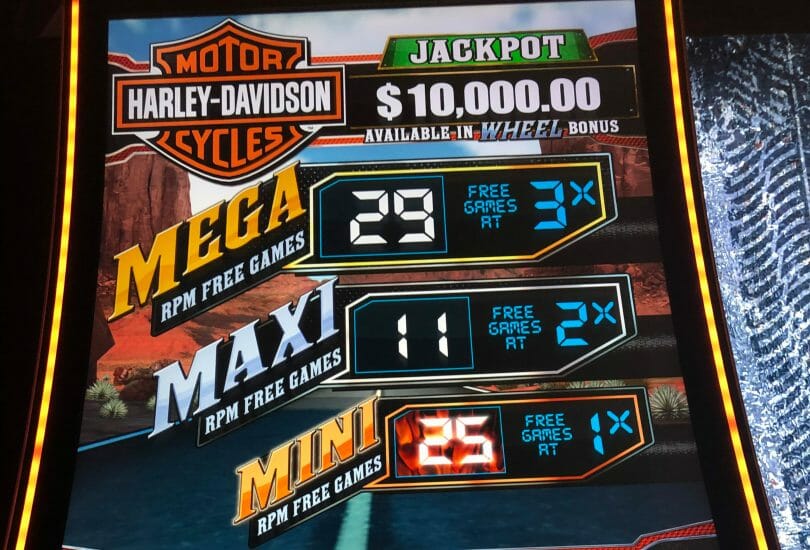 Harley Davidson is another IGT persistent state game, but instead of the reels having a persistent state feature, it’s the bonus game possibility, not unlike the newer Buffalo Diamond, which was previously discussed here.

The fact that the game count only is awarded when a bonus is retriggered, means some of the same caveats previously discussed on Buffalo Diamond exist here. But I had a chance to get a bit deeper with this game and will share a few other insights specifically from my sessions on this.

Unlike many IGT games with a persistent state feature, this game is only a 5×3 reel set. Like the Jurassic Park trilogy, and unusual for a licensed brand, the bet increments on the games I found were only 40 cent steps, which is refreshing compared to the bet creep on sequels and licensed games in recent years.

One unusual presence in this game is two types of wild symbols, both represented by the Harley Davidson logo. Ones with a black background are just a normal, run of the mill wild, but one with an orange background will be stacked, and when landed will align the stack to fill the reel.

When a Mini, Maxi or Mega symbol appears in reel 5, but not in combination with two other bonus symbols, it will increment the meter for that free spins level up by a spin. The meters will increment until the free spins are hit, and then they will reset to their starting point.

Getting a bonus symbol on reels 1 and 3, along with either the Mini, Maxi or Mega on reel 5 will award free games. The number of free games, and the multiplier awarded, will be determined by the symbol landed on the last reel:

The number of spins will be equal to what was on the meter at the time of the trigger. The meter is different for each bet level. Mini resets at 7 spins, Maxi at 8 spins and Mega at 10 spins.

The free spins work just like the regular games, with the ability to get the full wild reel when an orange Harley Davidson symbol lands.

One thing to note: The game will show flames behind a counter when the average level of free spins that level awards is about to be reached or exceeded, the game’s rules says. But this does not mean an increased chance of winning them. This is one of those indicators like the coin pot or fireworks on many of the Asian games. It doesn’t mean a game is “due” to hit.

Two bonus symbols in reels 1 and 3, plus a Wheel bonus in reel 5, will trigger the Wheel bonus. Higher bets will yield higher wedges and increase the chances of a jackpot, which is where they can be won on this game.

After spinning the wheel you have a chance for higher values and a respin, based on a pick. A maximum of three wheel spins can occur in this bonus feature.

The advantage is in the growing meter increments on each free spin meter. The challenge, like Buffalo Diamond or a standard progressive, is the lack of a “must hit by” mechanism. So you can see these free games build for awhile without any sort of a payoff.

In my attempt on this game I sat down at a machine that had 23 free Mini games at 40 cents. I finally hit the free spins at 50 free games, which means the Mini appeared 26 times without the two other bonus symbols before finally giving me the triggering combination. Meanwhile, my friend playing next to me got the Mini games three times in quick succession.

My estimation is the expected value of a 1x free spin is about 85% of your base wager, figuring the reels are roughly the same as the base game. (The game clearly states that they’re not, but that’s some really rough math we can work with.) The 85% is assuming an 85% payback setting on a penny machine, which is probably a bit low but better to be safe than sorry.

The general formula I would use for calculating a rough expected payback would be:

So at 50 mini free spins with a 40 cent wager, my expected value is as follows:

By the time I got the spins, I had put $40 in the machine, had at one point almost bombed out but had a nearly 50x line hit that put me back in the running, and I was down about $30. I won about $16, less than the rough expected value math but close enough to meet my expectation.

The problem is that I could’ve hit it at 40 spins. Or 100 spins. Games like this are volatile enough that it could be awhile.

If you want to pick a game that gives you a leg up, and this is going to be the game you want to play, you can evaluate the options of machines lined up side by side, just like you’re evaluating a progressive, and pick the one that has the highest spin counts.

But this is definitely a mechanism designed to get a player to keep pushing until they hit it, cost be damned, so it can either be a nice conversion or a massive money bleed. Approach with caution.

Here’s RandomSlots with game play and all the rules screens:

If I use that same expected value calculation here, but factoring in the 3x multiplier, my formula would be:

I won’t spoil his outcome, but I think my math is pretty useful if you’re looking for a quick rule of thumb.