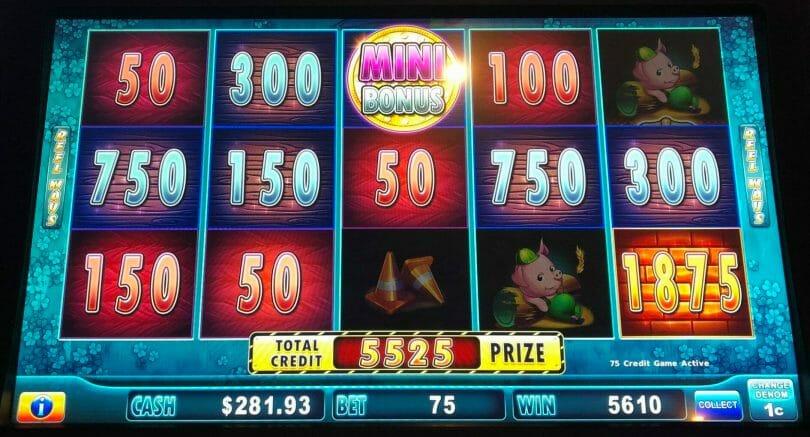 The Lock it Link series of games is a bit unusual in that there’s not one specific mechanic linking them; the number of symbols held, what they’re worth and so forth change based on the game type.

But that doesn’t mean the games aren’t popular, and perhaps the most popular is one of the most recent entrants in the series, Huff n’ Puff, which came out a couple of years ago now.

It has a bit in common with Hold On To Your Hat, which came just before it, in that a hat is the bonus symbol, and collecting more hats during the bonus gets you more prizes. Landing a hat in the same space upgrades the potential prizes (three times in the same spot gets you the top prize potential).

Unlike that game, it takes six hats to win, you only get six spins, and a minimum of three hats retrigger, but for just one extra spin. That said, the hats are much more plentiful on this game, making it easier to retrigger.

The spaces upgrade from straw, to stick, to brick houses (following the three little pigs theme). Stick houses can win the Mini or Minor, and brick houses can also win the Major or Grand. To learn how to #landthegrand, check out this previous article on the Lock it Link series, which walks through it in detail.

The game has a higher minimum bet than the other games in the series on the lowest denomination, but the game also has more money potential in the bonuses, so it does seem to balance out, in exchange for the additional swings a higher bet can introduce.

But the ability to have a bonus that can retrigger a few times, upgrade spaces, offer progressives, as well as decent line hits through its all ways pays format (standard for much of the Lock it Link series) makes it quite fun for those willing to take a chance on a harder game.

RandomSlots has a bonus and the pay tables:

Here is a video from TheBigPayback featuring up to $50 a spin on the high limit version: