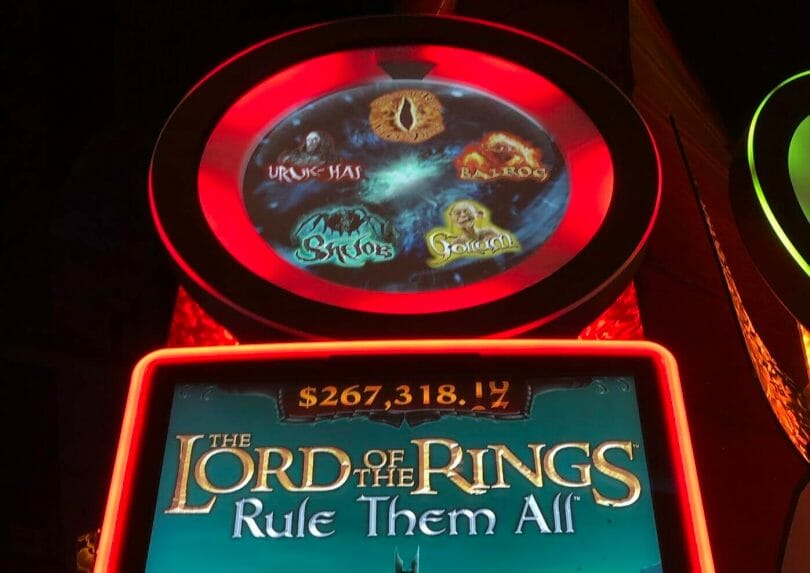 WMS has been circling back around to some of their classic 3-reel licensed games and developing new sequels that push things forward. I recently wrote about Wizard of Oz: Emerald City, but one that predates that one is the Lord of the Rings: Rule Them All version.

Similar to Wizard of Oz, the latest Lord of the Rings slot machine adds a second symbol, an Eye of Sauron symbol, to go along with the Gold Rings previously used on the last edition.

To have both symbols active and awarding bonuses, you must be on the 150 credit or above bet level. The jump from 40 credits per level to 50 credit per level is what adds those features in, but it also forces a minimum bet of 150 credits, encouraging higher coin in.

Unlike Wizard of Oz, there are not mixed pays for getting three mixed symbols. Instead, the symbols can both appear on the same symbol or reel at one time, improving the chances of triggering a bonus.

Like other three-reel licensed games in the WMS/Scientific Games series, there are a ton of different features, some of which have overlap with the Wizard of Oz game as well.

So as you can see they have a very similar set of bonuses, but you get more chances for bonuses on the Eye of Sauron bet.

Here is a promotional video for the game from Scientific Games:

Here is a video from Slotlady featuring the game:

And here is a video from Slot Queen: