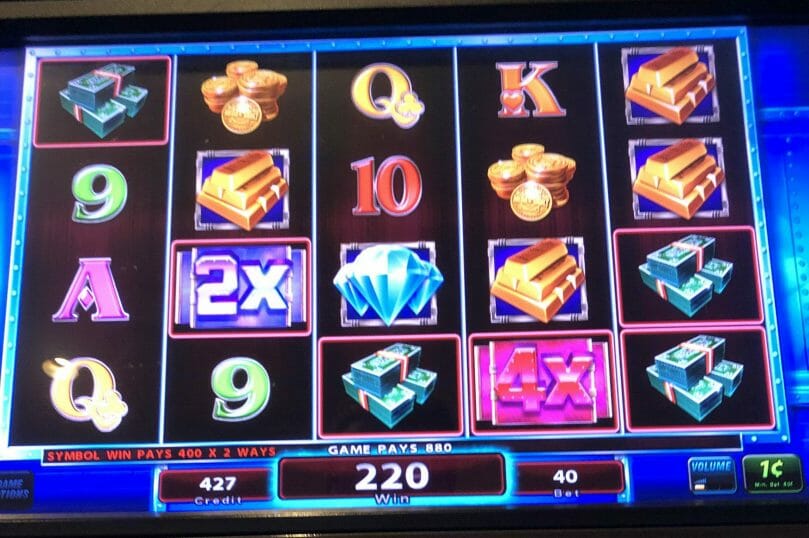 Mega Vault is the poster child of an extremely volatile slot done right – difficult to hit, but the hits you can get are absolutely insane. IGT broke the mold with this game and has been rewarded handsomely by having a game on their hands with a fanatic fan base among regular slotters. Some casinos have pulled the game quickly after massive jackpots because of its extreme volatility, but some have let the game survive for a few years now.

Today I look at Mega Vault and share a bit about why it’s something special.

Mega Vault is an all-ways-pays game that features 40 cent bet increments. Most games top out at $2.00, but you do see the odd version with higher bets such as $2.80 or $4.00. The reason for the smaller bets is because the game is among the most volatile out there today.

The reels includes wilds on reels 2, 3 and 4, but also serve as multipliers. 2x only appears on reel 2, 3x on reel 3, and 4x on reel 4. On the base game the reels are designed as such that there is only one multiplier able to be present on each reel, but you can get all three in a spin, which usually leads to a nice payout since you’re getting 24x (2x3x4) the line hit.

The top symbol, the $, is 5x your bet already (coincidentally the same as many versions of Buffalo), so you can rack up some hefty hits just off those multipliers.

The game also features symbol stacking, which can just further amp up the volatility by adding another way to multiply the symbols, since this is an all ways pays game.

Three or more vault symbols get you the free spins bonus. Three get you 5 spins; you earn additional spins if you land more than 3. Five spins may sound like not much, but the volatility of the game amps up considerably in the bonus.

During the bonus, if you land a multiplier on reel 2, 3, or 4, it locks in place for the remainder of the bonus. As such, you can stack up multiple multipliers in reels 2, 3, and/or 4, which can’t happen in the base game.

If you land two vaults on reels 1 and 5, it’s a retrigger, providing you with two more spins. If you’ve already collected multipliers that can be a real boon.

The potential for handpays on even small bets are there, if you can catch the right multipliers, but it can also be a bonus bummer with just the five spins to deliver.

Slot channel KURI Slot is one of the most devoted to the game and has some killer videos from it. Check out this amazing run, including not one, but TWO handpays: