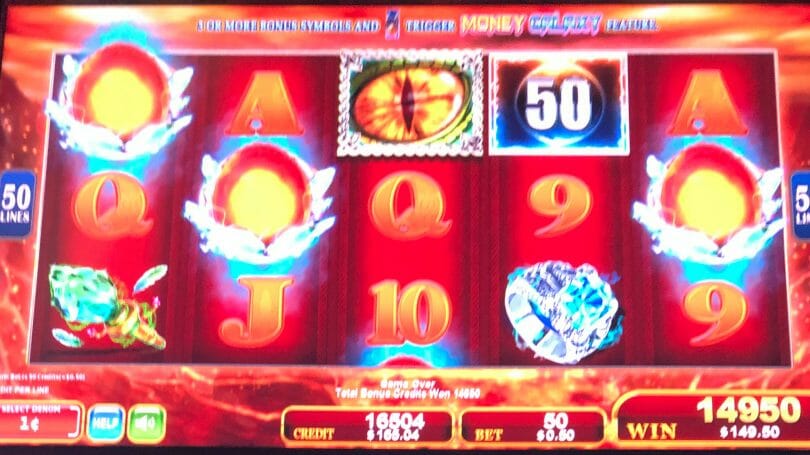 Just about every slot manufacturer has their own version of a link-style game, and probably a few at this point. My interest in them has grown and faded over time, largely because of how difficult many of them are.

One that’s held my interest for a bit now is the Money Galaxy line from Konami. I’ve seen three themes in the series: Dragon’s Return, Pharoah’s Power and Radiant Witch. (There appears to be a fourth, Glittering Wins, but I’ve never seen it in the wild.) Each has their own special features, but the one I’m most fond of Dragon’s Return.

In today’s post I’ll explain the Money Galaxy mechanic in general, and the basic differences between the three themes, concluding with why I like Dragon’s Return best and where you can play some of them for free via the social gaming apps I’ve reviewed earlier.

Money Galaxy is Konami’s closest competition to Lightning Link – they have other games that have similarities but the ways the jackpots are organized are quite familiar. They are multi-denomination games (although generally limited to 1/2/5 cent options) with a linked top progressive jackpot and four jackpots in all available to win.

Similar to Lightning Link and the ability to be awarded randomly the Mega or Maxi, the same capability exists in the Money Galaxy series. Also similar to Lightning Link, only the top progressive prize (the Maxi) is linked on all machines. The Mega is independent progressives per machine, and the Mini and Minor are simply flat jackpots based on the denomination of the game.

The base games themselves, and the Money Galaxy feature, are more in line with the best of what you find with Konami, so these are certainly not clones.

The Dragon’s Return and Radiant Witch base games are pretty standard; however, Pharoah’s Power features the Fade Away feature, similar to Chili Chili Fire and Octoblast.

On any spin, after paying the initial spin, the Fade Away feature can zap away the non-premium symbols and the remaining symbols cascading down, repeating this until the reels are full of premium symbols or Bonus Prize Symbols.

You can more easily trigger the bonus or Money Galaxy features when this happens, or potentially get a big line hit if you get enough premium symbols lining up. It doesn’t happen often in the base game, but it’s a twist on the others. And like the other games, if you get three bonus symbols and then Fade Away, you immediately retrigger.

Get three Bonus Prize Symbols and the tall character trigger symbol in reel 5, even in part, triggers the Money Galaxy feature.

It works like most of the Link games you’re used to – spin the reels and if within 3 spins you land another Bonus Prize Symbol, the counter resets to 3 and you keep spinning.

If you fill the first board, you move on to the second board, which all prizes are multiplied by 2.

If you complete the second board, you move to the third and final board, where all prizes are multiplied by 3.

The game’s paytable clearly states the odds of winning a progressive are proportional to credits bet, so your chances increase when betting more, which would make sense given the progressives are available at all levels. That said, that does mean you have at least a chance of a progressive win at minimum bet.

The Allure of Dragon’s Return

What makes Dragon’s Return the game for me is the volatile, but fun, bonus games structure. Dragon’s Return gives you only four free spins when you get three bonus symbols (it doubles to 8 with four), but the fact that you get a guaranteed Bonus Prize Symbol on each reel and only need to grab the dragon on reel 5 means you generally get multiple Money Galaxy bonuses within the free spins.

Retriggering isn’t unheard of – I’ve done it a couple of times in a limited number of sessions. Bonuses aren’t easy to trigger, but not impossible either – I’ve gotten quite a few of them. And get a couple of Money Galaxy rounds and a 100x bonus isn’t unheard of, and I’ve managed a couple of 200x ones as well. My hero image shows a close to 300x one.

With the other two, the free spins are more “normal” in that the difficulty of triggering a Money Galaxy bonus is still pretty limited, even with the additional spins. Of course, you can get some good line hits in the bonus two given the features of each, but it plays differently.

For instance, on Radiant Witch, one version I played didn’t even make any bonus sounds for landing bonus symbols – it just rolled right into the bonus triggered sound. I don’t know if that was a glitch, but given how minimal the bonuses tended to be and the frequency I was getting them (I get them more on that game than the other two), perhaps it’s considered less special? But it’s probably just a glitch that is reinforcing my feelings on the game.

I’ve been a convert to playing all three of these in the past few months, but Dragon’s Return has taken the lion’s share of my bankroll attempts. With some of my former favorites such as Power Spins fading from view, it’s nice to have another good, volatile but fun game available to take its place for me.

If you’ve never seen these games, you can find Dragon’s Return and Radiant Witch in My KONAMI, as well as Radiant Witch in MyVEGAS on Facebook. They’re of course in many casinos by now, having been around for awhile, so you’ll find them in various places as well.