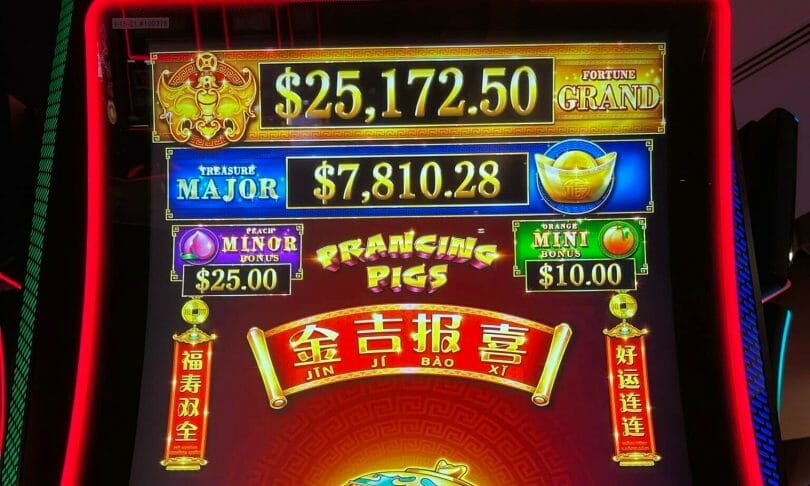 The Jin Ji Bao Xi series, which offered theme extensions for its original set of games such as Rising Fortunes (which borrowed from 88 Fortunes) and was itself an extension of the Duo Fu Duo Cai series of games, saw enough success to see a series extension with Prancing Pigs.

This version keeps some of the newer twists for this game, such as the ability to win the grand jackpot as long as you’re wagering 36 credits or more, while offering a new volatility choice based bonus round.

The bet panel remains the same, with the ability to bet one to five gold symbols, and line bets based on that. The progressives aren’t linked to the gold symbols, however, just the payouts for the symbols being gold or not. The reel sets change based on the wager selected, according to the pay table.

Collecting six or more coins yields a bonus; the more gold symbols you’re betting, the bigger the values on the coins can be, and the 5 gold symbol has the potential to go well beyond the others, albeit as a rare coin.

Top Up works just like on the other versions, with collecting all 15 spaces yielding the grand jackpot (as long as you’re wagering that 36 credits; otherwise you get the minor), with green orbs paying higher multipliers if it lands as the 10th orb or higher. +1 spin can be awarded until you reach 12 spins. If you have 14/15 spaces filled, cards will appear allowing you up to three more spins, similar to Mighty Cash.

But when you get the bonus, you also have a volatility choice for the free spins:

Coins appear on reels 2-4; landing all three retrigger for the number of spins originally selected, a nice bonus. Even if you do the free spins, you still have a chance of winning the grand (at 36 credits or above) or the minor (below 36 credits), with higher bets having a higher chance of winning that jackpot.

Aside from these changes, this version has a 5 of a kind acknowledgement, a new addition to games like this but pretty savvy given that’s where the pays can get quite good on games of this format, especially all ways pays games.

It maintains the fun of the other two themes in the series, remains a bit tough like they are, but the bonuses have quite good potential to deliver, so it makes working towards them exciting.