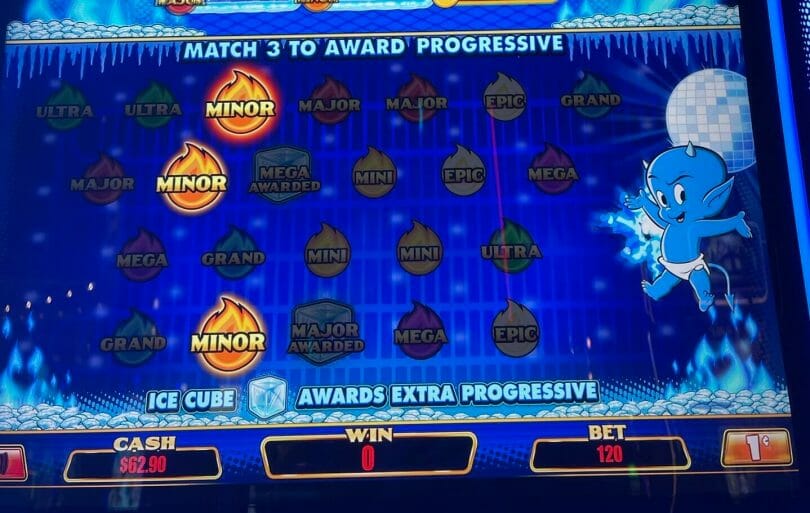 Conversely, if it shows the other options, it’s supposed to be a true pick. However, Everi was revealing the unpicked options of predetermined bonuses on games like Smokin’ Hot Stuff Wicked Wheel.

I was told that the regulations had changed in Nevada, and as such that would lead to a change in how Everi handled predetermined pick bonuses. So what’s changed?

In Massachusetts, apparently nothing has changed. When I played the extension to the Wicked Wheel series, Smokin’ Hot Stuff Wicked Wheel Fire & Ice, it still showed me the unpicked options, as seen above. Massachusetts regulations use Nevada’s as a starting point, but they may be still using an older version of those Nevada regulations. Perhaps in the future a change will be needed in Nevada as well.

The same is seen in this video from TheBigPayback around 5:33. Right after Tim picks the third symbol, it shows the other options.

However, it does appear the behavior has changed in Nevada. See this video from VegasLowRoller, who films in Las Vegas. Right after he picked his third option at around 7:41, the other coins fade out, but do NOT reveal the other options.

So it appears Everi has chosen to still show the other options where they aren’t obligated to not show it per regulations, as opposed to universally following the conventional wisdom and standard within the industry.

I can’t say I’m necessarily surprised, since they went this direction to begin with and clearly have for awhile, but it’s a bit disappointing they didn’t use this opportunity to conform to norms. It’s now even more obvious because it’s so easy to look up a video from a player filming in Nevada.

I realize not many players will be paying as close attention as I will, but those of us who are paying attention will also be pointing it out to others.

I will maintain my position that it doesn’t really matter in the long run if a pick is true pick or predetermined, but some players really have opinions on this, and Everi is for some reason bucking the trend for better or worse.

So, if you want to know whether an Everi bonus is predetermined going forward, simply watch a video from a player like VegasLowRoller where it was filmed in Nevada, and you’ll at least be able to determine it that way.