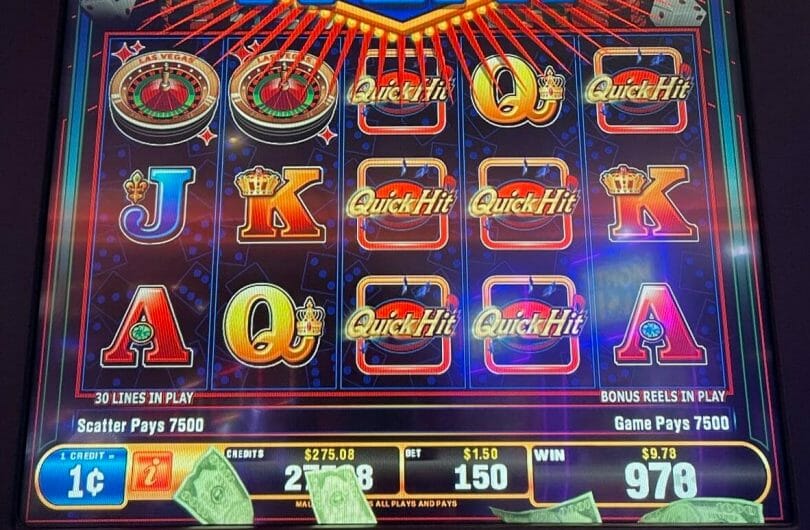 My enjoyment of the Quick Hit series has been something well documented here over the past couple of years. One version that I tended to not gravitate towards, but did recently on my latest cruise, is the Las Vegas version.

This version of the game (which has a clone in the Dragon theme) features the standard 5×3 format and five progressives (for 5 through 9 Quick hit symbols, respectively) of most other versions introduced in that era.

The game comes with 30 lines and a $1.50 max bet on pennies the times I’ve encountered it, including on the cruise. The progressives follow the standard (for that era) Quick Hit starting seed jackpots of 10x for 5 Quick Hit symbols, 50x for 6 Quick hit symbols, and so on (unlike newer versions today which tend to pay less).

The game features stacked wild symbols, something different for the series, and probably one of its clearest key differentiators.

The game features the “match 3” pick screen for the bonus, but has a couple of key differences. For one, you can get up to 25 free games without the wild. However, all of the free games options are at 1x. The wild can therefore add either 5 free games, or up the multiplier.

I had some fortunate luck on the game, with 6 Quick Hit symbols coming out a couple of times during my bonus, once at 2x (yielding a 100x hit on a single bonus spin) and once at 1x.

I had been playing in part because I was hoping to pick off the 6 Quick Hit symbols during the base game, as the progressives (like many Quick Hit games) are not available in the bonus. Alas, I only got it in the bonus, and the progressive was well over $100 (having started from $75) by the time I left the ship.

The bonuses came relatively frequently, although it did feel like a touch more of a volatile ride than some of the other earlier Quick Hit machines, probably because of those stacked wilds.

The theme has come back around (along with features like the stacked wilds) in more recent years as part of the Quick Hit Super Wheel family, so those who are curious about how this plays differently can also give those a go.

Here’s a video from TheBigPayback featuring the game and a bonus at that $1.50 bet: