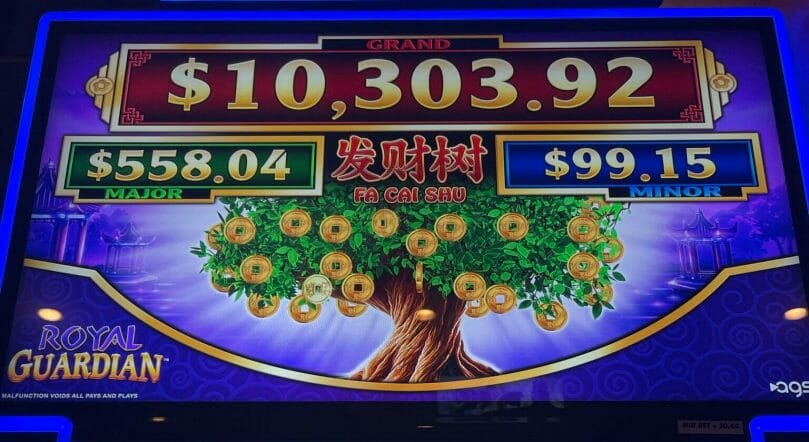 While visiting Magic City Casino in Miami I came across an AGS game in the Fa Cai Shu family that I hadn’t seen before, Royal Guardian.

The features and play indicate the game is a clone of Eastern Dragon, one of my favorite of their games, given the frequency with which I’ve gotten some crazy line hits on the game.

The game has an all ways pays structure with 60 credit bet increments on a 5×4 reel set. The game has two base game features that are pretty helpful.

The biggest helpful base game feature is when one or more wilds land, the expansion feature can occur, which expands the wild to fill the reel. Wilds appear on reels 2, 3 and 4, so you can be guaranteed a stack of 4 of a kinds minimum if you get them in all three reels.

On Eastern Dragon these are my bread and butter hits, and this was no exception playing this time. I got multiple expansions that paid out a good chunk relative to the bet, and those can keep you going for awhile.

As far as that second feature, when a wild lands, it can also send also coins up to the trees, and that action can sometimes trigger a predetermined pick screen that awards free games, but also sometimes one of the progressives.

During a lengthy session at Magic City Casino, I got the pick screen twice, but just got the free spins. Free spins can also be triggered with three or more free spin bonus symbols. The bonus is 8 free spins, and it can be retriggered in the bonus. Best of all, the wild expansion feature occurs every time a wild lands during the bonus.

These are certainly volatile games, but the pays are there, and they seem to come frequently enough despite the difficulty, making it a fun series to seek out. I very much prefer these over the variations with multipliers, which are also part of the series.

As of this writing I can’t find a single video on the game, but I will add them when I do!