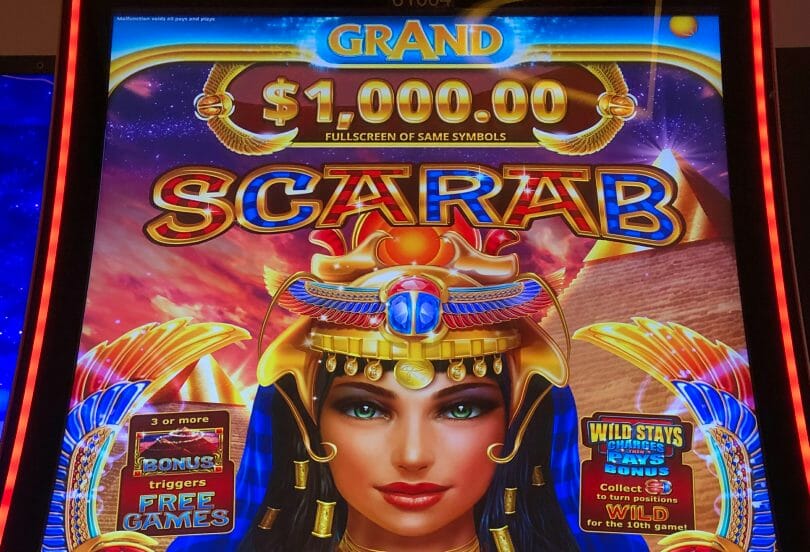 One of the more popular persistent state games in recent years has been Scarab (along with its clone Diamond Mania), a straightforward, easy to understand game that also makes it easy for players to know when an Advantage Play scenario is present.

Scarab Grand is one of the sequels IGT has been introducing to build off the success of the game, and similar to many (but not all) of the other Grand sequels, it largely stays true to the mechanic of its original. But in this case, the game seems to also have gotten a little tougher.

This time the game is configured as a 5×6 reel set, 50 percent bigger than its predecessor and similar to Icy Wilds Deluxe. Unfortunately, also similar to that game is the maintenance of the same number of lines, 75 in the case of Scarab, while the bet increases by 25 credits. In this case, that means 100 credits per bet step.

The persistent state reels are maintained per bet level, as per the original Scarab, and in the machine I reviewed only three bet levels were present, meaning a max bet of $3. In a video at the end of this article, you’ll see a $5 bet, so this is ultimately going to vary by casino.

Like in the original Scarab, the game is organized in 10 spin cycles. Whenever a Scarab lands in a space, a gold border is frozen around it and stays until the 10th spin. On the 10th spin, any remaining Scarabs get their borders, all gold bordered symbols turn wild, and pays are evaluated.

Naturally, the 10th spin tends to pay the best, but it all comes down to where the wilds are placed, how many, and the symbols that fall in around them.

One new addition to the game format is the presence of a jackpot, awarded if an entire screen of the same symbol lands. On $1 bet, the jackpot is $1,000, but it does also change by bet level to maintain the value of 1,000x the wager (so a $5 bet will have a $5,000 jackpot).

Like the original Scarab, it’s the 10-spin structure, the placement of any left behind wild spaces and how many that make this a high advantage game. The ability to quickly look at the game to know whether there’s an advantage is one of the reasons why it’s so high, but also knowing what exactly you have to work with.

The rules I established to evaluate the original game, and elaborated on around its clone Diamond Mania, are maintained here:

Despite Scarab and other games in the series with 10 spin cycles having been around a few years, there’s still plenty of slot players who don’t get the game. I still routinely see players walking away in the middle of the cycle. Not every cycle is a great opportunity, but some are, and it’s in those scenarios where it’s worth it.

It’s also helpful that with a 10-spin cycle, you know exactly how much you need to invest to complete the cycle. With other games, you may be close to achieving something but have some unknown spins required to achieve it.

That said, the changes made to the game seem to make it harder to get something really special. I gave the game some considerable play, and while I didn’t expect a Bonus given how difficult they were to get on the original, I found that needing all those extra wild spots to get the same 75 lines to pay proved a bit harder.

Add in the extra quarter per spin, no doubt in part collected to fuel the new jackpot, and I am rating this one step down from the original Scarab in terms of the opportunity. I still think this is a good game to check, but players should expect a bit more difficulty in pulling out a win compared to the original, unless you have a lot more wilds in place, which is of course possible.

Unfortunately, Scarab seems to fall into the same sequel scenario many popular slots get, where the game gets a bit harder, and the bets a bit higher, than its predecessor.

The Free Games feature is basically the same setup, but with different choices given the larger reel set. It’s still a volatility choice:

Like the original Scarab the wilds will land at random. With 30 spaces to fill instead of 20, it’s interesting that the most volatile version will fill half the spaces, just like on the original Scarab, and given the same number of lines are in play, there is a bit of a similar comparison here.

Slot channel Palm Spring Spinners included it in a recent video, with their play starting at 1:45 and a very special outcome towards the end:

Have you played Scarab Grand? Share your experiences in the comments below!