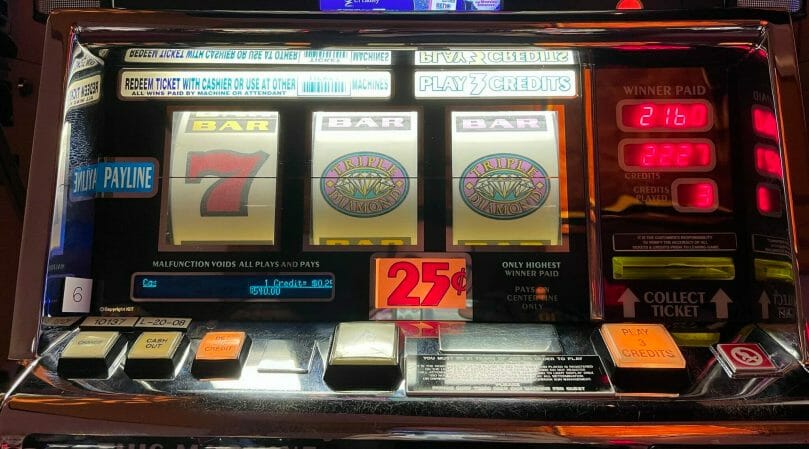 Since becoming more excited about mechanical reel slots and my success playing them, I’ve also sought out a bit more YouTube content to watch others play them, and see how they do.

YouTube channel OldSchoolSlots caught my eye awhile ago as he’s up in my neck of the woods, playing games at the same New England casinos I frequent, so I find his channel pretty interesting and sometimes see how he does on various games.

He’s got a lot of great wins on his channel, but a couple stand out to me, one more recent and one a more classic video on his channel.

The more recent is on the game Wild Cherry, of which I’ve written about the Double Wild Cherry variant in the past.

In fact, the video recaps a couple of other hits he got in the series of videos this concludes, including a pretty epic win on Double Diamond Deluxe (which you can catch starting around 4:10 in the video), but the Wild Cherry portion is where it gets crazy, and it starts at 6:03 in the same video:

But this isn’t his first time getting the top symbols to line up. For that we go to the older video I previously mentioned.

The classic video actually returns us to Double Diamond Deluxe. Playing the $10 denomination, 2 credits, which is this game’s max bet, the action starts at around 5:18:

This one takes a few minutes to get there, but some line hits keep him going, and thankfully they do because he ultimately lands 1600 credits on the $10 denomination, or $16,000.

What’s really cool about his videos is he doesn’t put a particularly large amount into his machines – he puts $100 here, $200 there, and takes some swings, and he gets some phenomenal outcomes.

For those who want to dabble in high limit, this is certainly one way to go – it might not always work out, but it also doesn’t require massive cash bankrolls to do what he does on on occasional basis either – some will burn through that and more on a penny slot in the same amount of time with some of the bets possible nowadays.