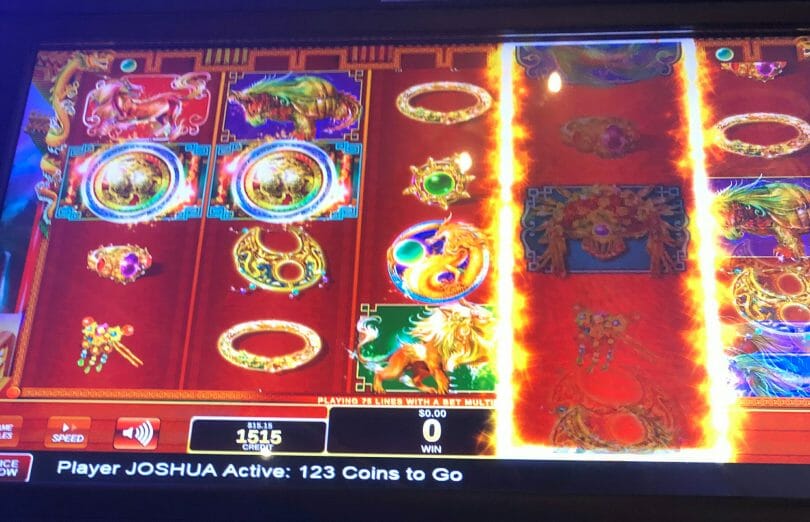 There are some aspects of slot machines that become ingrained in tradition over time. So when such a feature is missing from a slot it can feel unusual.

One is an Anticipation Spin. This is what happens when you’re close to achieving a bonus or feature, and the reels spin longer in anticipation of that opportunity. These can break out in a number of different ways.

The most common is when you get two bonus symbols and you’re searching for a third. The reels will generally spin longer and make a sound to indicate you’re that close, and build that anticipation.

When Buffalo Gold Revolution first came out, the games that hit casino floors didn’t have an anticipation spin, which many noted as weird. An updated version that some casinos have restores that anticipation spin back to the game. You’ll find both versions out on casino floors, but the player feedback that it was missing that little something and so the newer version has it.

Of course, anticipation spins aren’t a new creation. IGT games twenty years ago had the ability to bring the reels to a stop slower on particularly big wins. That was the case when I won a pretty sizable hit on an old Triple Diamond machine awhile back. Instead of the reels stopping at a standard pace, each one came to a stop much slower than normal, which was the game’s way of saying something unusual was going on.

Anticipation spins can be used on Cash on Reels games when you’re close to getting the number required as well, such as on Mighty Cash games, so it certainly doesn’t have to be a free spins bonus either.

And some games will do a graphical tell (stars flying by, money flying around, lions/tigers roaring or whatnot) that anticipates a big win, feature or bonus is on its way out. This is particularly common on newer video reel games, where they have a full computer screen to work with, vs. the older three mechanical reel games.

Of course, some anticipation spins are signs that a bonus or feature is possible, while others, like the IGT reel slowdown or the animations, are indications that something is definitely happening. But as an anchor of slot design, these scenarios are pretty well established at this point and something players look forward to seeing.