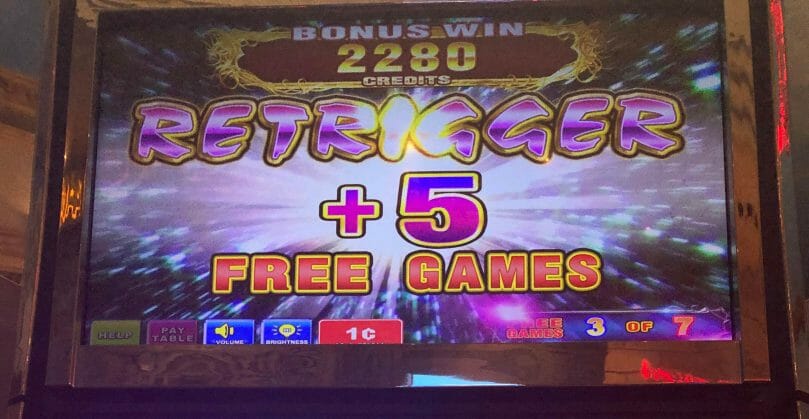 Many players get excited when playing a slot machine and getting a free games bonus, and getting additional spins while playing one can add to the excitement. But if you’re unfamiliar with the term retrigger, we’ve got you in today’s post!

Some games are more predisposed to retrigger than others. For instance, the Buffalo series of games requires three coins, which are the bonus symbols, but you can get more spins with as little as two coins, making more frequent retriggers within the bonus possible.

Another game series with frequent retrigger potential is the Moolah series, where the cascading wins can offer free games.

For some games, retriggers simply extend the bonus, like that original Buffalo. Having more games can certainly increase the chances of a big line hit or additional pays that make the bonus bigger, which can be important on games where the occasional massive line hit can be possible, such as the Tiki Fire/Heart Throb versions of Lightning Link.

But sometimes, those retriggers can be important because the real potential in the bonus is an extended one, such as Buffalo Gold, where you have more time to collect gold heads, and ultimately, more buffalo line hits as symbols convert to buffalo heads.

Then there’s the games that either the trigger or the retrigger can offer plenty of free games, into the hundreds, and can keep your bonus going for quite some time. I once watched a guy playing a Konami game get a few hundred free spins, and then within the first 100 spins get a similar retrigger. He was there awhile.

So, retriggers are simply triggering combinations that repeat within a bonus, usually the free games, and are generally sought out by players to extend or improve their bonus wins.