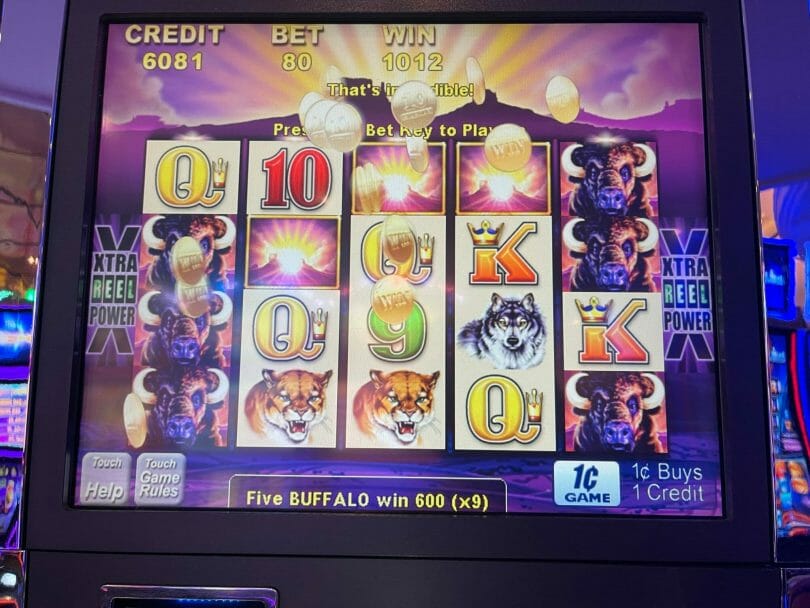 Over the past few years I’ve written about many Buffalo sequels, whether Buffalo Gold, Buffalo Gold Revolution, Buffalo Chief or Wild Wild Buffalo.

However, today I want to focus on the game that started it all, which is now something like 15 years in from its origination, Buffalo. Like the games that follow it, it’s an all ways pays game in a 5×4 reel set with 1024 ways to win.

I’ve had a couple of opportunities to sit down and play the original on older cabinets in Las Vegas and on my latest cruise, which has helped me remember what made the original game so special.

For one, as you can see on just the screenshot above, base line pays can come out in full force even without anything but Buffalo and wild symbols, which are found on the middle three reels.

Some of the pays that happen in the game make a bit more sense when looking at the original game. For instance, three coins pay 80 credits on minimum bet, a pay that hasn’t changed as many of the sequels have passed through. That 80 credits is 2x the 40 credit minimum bet the game features, which as a number makes sense.

Three or more coins yield a free games bonus that can trigger 8 or more games (more coins yield more games), and of course many of the classic Buffalo bonus rules are established here, such as 2 coins or more retriggering the bonus, and 2x and 3x wild multipliers featuring in the bonus, enhancing the pays.

The game can be tough, as can the bonus, but it makes up for it in spades by the massive potential that can come from the clumped buffalo symbols and wilds/multipliers.

Here’s an old video which shows a jackpot handpay on Buffalo at the $4 bet level:

Here’s another video, this time with a minimum 40 cent bet with a nearly 200x bonus: