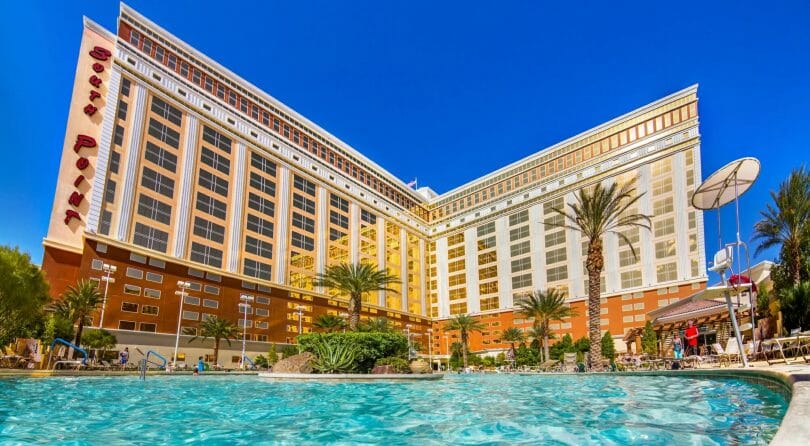 It took 10 visits to Las Vegas before I visited South Point, and I actually had multiple reasons for checking it out this trip. One was a game series that I had previously previewed at G2E, Coin Streak, had been installed there and I wanted to get a bit of hands-on play. The other is a friend of mine wanted to get a New York-style bagel and spoke highly of their deli for that.

So off we went, to a strong locals casino, south of the main strip hotel zone that most know, but still on Las Vegas Boulevard. Here’s some thoughts from my visit there in the summer of 2022.

This is a big casino floor, with 2,200 slot and video poker machines, as well as 60 table games. The slot floor was expansive with a lot of old and new games to play. You’ll find a lot of old favorites but you’ll also find some of the latest games, which is one of the things that brought me out that way.

Video Poker players will find ample games above 99% payback, including full pay Jacks or Better, throughout the casino floor. There isn’t any over 100% games but there’s enough games in a range that should be accessible to many, especially since they’re available at quarter denomination and up. On the strip it’s not uncommon for similar pay tables to require a $1 or even $5 denomination to access them.

Their table games include the standards like craps, blackjack and roulette, as well as other games like Progressive Fortune Pai-Gow Poker, No Commission Baccarat, Ultimate Texas Hold ’em with Progressive and Three Card Poker with Progressive. I didn’t have an opportunity to check out the minimums during my visit.

South Point offers bingo, with higher payouts than some of the other options, but you’re going to be competing against more people, so there’s obviously pros and cons to such a structure. But they do occasional million dollar sessions, so if you want to swing for the fences there’s an option for you!

The standard rooms at South Point are pretty large – 500 square feet for a king or two queen room. There’s ample space and plenty of seating spots in the rooms, so you won’t feel cramped.

In an interesting twist for hotel guests, their resort fee (half that of most main strip properties) includes amenities like an airport shuttle, which is handy given a cab to or from the property alone will cost more than the daily resort fee. They also offer a casino fun book with coupons, helpful for driving more value.

They have their own program, where you earn a point per dollar for your play, and it takes (in their words) 4000 points to earn $12 in comps. That works out to roughly 333 points for $1 in comps, in the mid range of what you can find. The points can be used for comp dollars or free play.

South Point runs the gamut from accessible and affordable (their daytime Hot Dog Cart, Steak ‘n Shake and Del Mar Deli, which is where we got the New York-style bagels) to more upscale options (the required casino steakhouse, Michael’s Gourmet Room, Don Vito’s).

Their Garden Buffet is also one of the ones in Las Vegas that are re-opened, and among the best values consistently. Being a players club member can also knock a few bucks off the price, so keep that in mind as well. Seafood night, which is their most expensive option, is on Friday nights.

South Point has your standard spa and salon, but they also have a barber shop focused on mens’/boys’ haircuts, shaves, beard trims and more.

South Point, like many locals casinos off the beaten path a bit, has other features to draw locals such as movies and a bowling alley.

South Point Arena and Equestrian Center features fare most other casinos can’t host, such as BMX racing and horse shows.