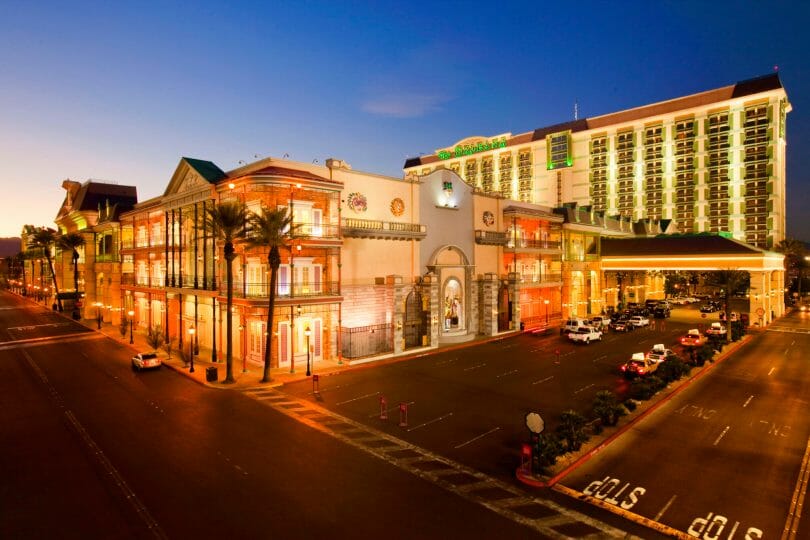 When you’re in Las Vegas, you don’t tend to need excuses to visit a casino. I found myself arriving to the general area of where I was to pick up a rental car more than an hour ahead of time, and so I decided to check out The Orleans, which was across the street, and spend a bit of time in there. I was glad I did! Here’s a rundown of the property.

I was pleasantly surprised by the size of the property and the casino floor. The casino floor is 135,000 square feet, with a sizable slot machine section that featured a strong mix of older and newer games. My mechanical reel Quick Hit machines were there with very favorable max bets, but so were the modern Quick Spin games.

Frankly, there’s a lot to choose from, and a generous layout of slots on the casino floor, so you won’t have any real issues finding what you want to play. And best of all, Boyd Gaming casinos have a slot search so you can see what games there are to play, and their relative location on the casino floor.

They also have a sizable table games section that was pretty open when I visited in the fall of 2021. I played craps there for awhile, and found accessible $10 minimums, which given the casino is off strip and more catered to locals makes sense. I was also there on a Sunday, so being it was a weekend it was nice to see that as well, given what I had found on the strip during that trip.

There’s some good video poker pay tables to be found there, although not for all game variations from what I could find, anyway. It’s definitely closer to what you’d find on Fremont Street than on the strip.

I have not stayed at The Orleans but the rooms look pretty standard, if a bit dated at this point. The property has almost 2,000 rooms, built in stages, and there’s strip view rooms available given the relative proximity to the strip.

One sort of bummer is that basic Internet is capped at 1 mbps, a slow speed for 2021, and you have to pay $10/day to get bumped to the faster 10 mbps Internet. So if you have to work from your hotel room, be aware of the potential to have to pay for truly usable internet.

The Orleans is a Boyd Gaming hotel, so it’s part of Boyd Rewards, previously B Connected. Compared to other comp programs in Vegas, it isn’t particularly generous, with you needing to tier up to even earn comps and it taking 1000 points to get $1 in comps (with $1 per point on slots and $2 per point on Video Poker).

Points also expire after six months of no activity, so if you’re not visiting regularly enough, it can be tough to maintain your comps. As noted earlier, it’s definitely more focused on a locals crowd.

A shuttle runs between The Orleans, sister property Gold Coast and The Linq on the strip every half hour for a portion of the day, so if you stay at The Orleans you do have a way to the strip without a taxi or Uber.

Most of the food options run on the affordable site, with a food court and other quick bite/casual options. They have two more upscale restaurants to balance things out but most of the options will be quite accessible.

Being a locals casino, it has a lot of extra activities, including a movie theater complex, bowling and an arcade. There’s also a 9,000 seat arena and smaller showroom for entertainment, so they can cover a lot of bases at one location.