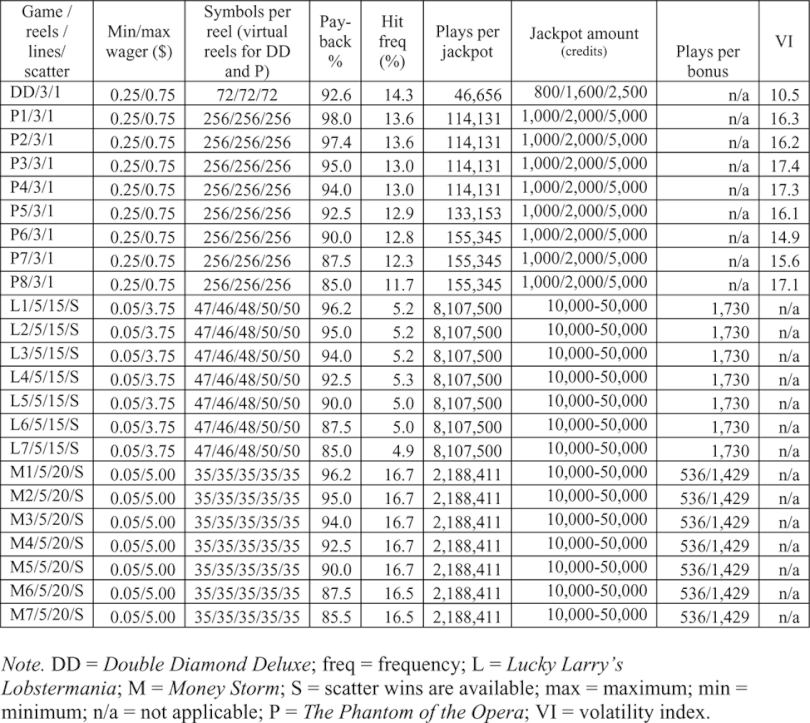 At a very basic level, slot machines rely on math to ensure the outcomes that they promise over millions of spins. Some of that math has to do with how the reels are built and the outcomes that are possible as a result of those reel designs, and how frequently the slot can stop in those positions.

Physical reel slots have limitations as to the number of stops they can make, but virtual reels and other innovations allow for weighted positions on reels to adjust things in ways that make common symbols more common and rarer symbols more rare.

So for casinos to have an understanding of how each game is designed, PAR sheets are made available that explains for each payout percentage what the design of the game is to ensure that the game reaches that expected payout percentage – ie: the par result (and why they’re called PAR sheets).

Today’s post will take a look at how PAR sheets convey this information, based on ones that have been released publicly, and what can be learned from them.

PAR sheets are generally confidential information, as they are effectively the secret sauce of the game’s design. They can convey how often a bonus is expected to trigger, the average bonus payout, the average expected line hit and more. They can also explain the differences between payback versions and how the designers adjust the reels to achieve each payback.

It should be noted PAR sheets are governed by games that operate within themselves, that is Class III/Vegas-style slots. Games where the outcome is determined outside the machine, this math doesn’t apply because the game is not actually doing anything but illustrating a result of a wager made that called out for participation in Bingo, Historic Horse Racing or a result pulled from a centralized server (like digital scratch-offs). As such, PAR sheets related to true RNG-driven games where the reel layouts and their use have an impact on the final outcome of the game.

One often cited study is one published in the Journal of Gambling Issues in 2009, which we’ve referenced here in the past. In it they were able to analyze the PAR sheets of a few popular IGT slot machines and their various permutations. The image above shows an example of the reel position counts for two versions of Lucky Larry’s Lobstermania, a slot still popular in casinos today.

The reel layouts differ in critical ways to achieve an 85% payout vs. a 96.2% payout, and despite that it’s packaged in the same graphics, look and feel, so most players will be unable to truly know without observation if it’s set at one extreme or the other, or something in between.

The second chart shows that hit frequency can decrease on lower payback games, but many times not appreciably, so a player will still get some sort of a payback (whether a win or a loss due to not being paid back the amount bet, but only a portion thereof) at the same rate. As such, when games are designed that way, players are unlikely to be able to tell a massive difference unless the paybacks are drastically different between machines.

Games can diverge wildly in design. Double Diamond Deluxe, a physical three-reel game, has only 72 positions per reel, and as such a limited number of outcomes. It also has a small 46,000 plays per jackpot expectation. On the other hand, Lucky Larry’s Lobstermania has five reels with nearly 50 positions per reel, and the odds of hitting a jackpot is more like one in 8 million (although the jackpot is 10 times bigger than Double Diamond Deluxe).

The above two charts are an aggregation of PAR sheet information. Let’s take a look at one example to see how an individual game and payback level is shared.

This par sheet example is for an IGT game from 1987 which was published in a book in 1998 called Casino Operations Management. This game was a three-reel game with physical reels with 22 positions each.

In the Reel Strip Listing, the reels were expanded to 32 positions each, duplicating certain physical positions to appear more often, which is how the game would achieve the payout it was aiming for, which was about an 85% payback. It was designed that at 90 percent confidence and 10,000,000 spins, the game would be within a half point of that payback.

The game was designed with two-coin pay, with certain pays increased for the second coin. The payback for only one coin is a painful 76%, which just reinforces why on many old school one payline physical reel machines, you should max bet whenever possible.

Since PAR sheets released to public eyes are a rarity, and knowing which payback a given slot machine is set to in a casino, it’s not going to give you information to pick out the winning slot machine or one that will pay you more than another (although as we said earlier, analyzing games with more public payout information, like Video Poker, may give some clues). But what it can do is help players understand how these games work, and how making certain betting decisions can impact a game.