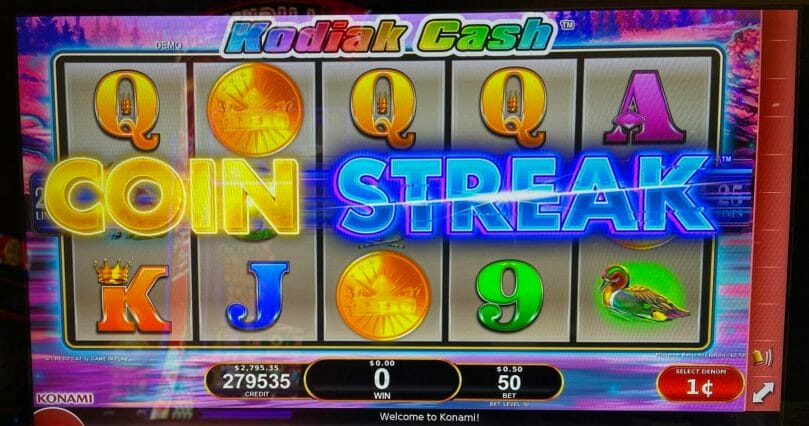 During my summer Las Vegas trip, I made the trek over to South Point to have breakfast with a friend. While there, I also took advantage of the opportunity to try a game series I previously wrote about in my Konami G2E coverage last fall, Coin Streak.

Coin Streak is a pretty straightforward game. There are three themes, each with their own little twist, but the game series is really about two things: Base game line hits and the Coin Streak feature, which is the unifying element.

The Coin Streak feature is triggered when three or more coins appear on the base game reels. Seven free spins are awarded. The reels transform to blank spaces and coins only. Coins are added after each of the first few spins.

Each time a coin lands, the value of the coin is collected and the space turns blue. Fill a reel with blue spaces and you’ll be awarded a bonus spin. Getting three or more adjacent reels completely filled awards a progressive.

As it turns out, I had a lucky go during my time on the games, as I managed the four right reels and won a $243.72 progressive, along with the credit prizes I had collected along the way, for a roughly 100x win.

About those line hits now. Each game does something different, like wild reels or mystery reveals. Stacked symbols are also introduced on one version. Top symbols can have five of a kinds around 5x (more or less, depending on the symbol) your line bet, per line.

The 25 lines on all bet levels is a unique aspect of the game, which rebalances the bets and payouts, vs. the line count, for different denominations.

The game is one of the first from new game studio Junto Creations, who produced this and other games for Konami.

VegasLowRoller played the Coin Streak series starting at 12:26 of this video: