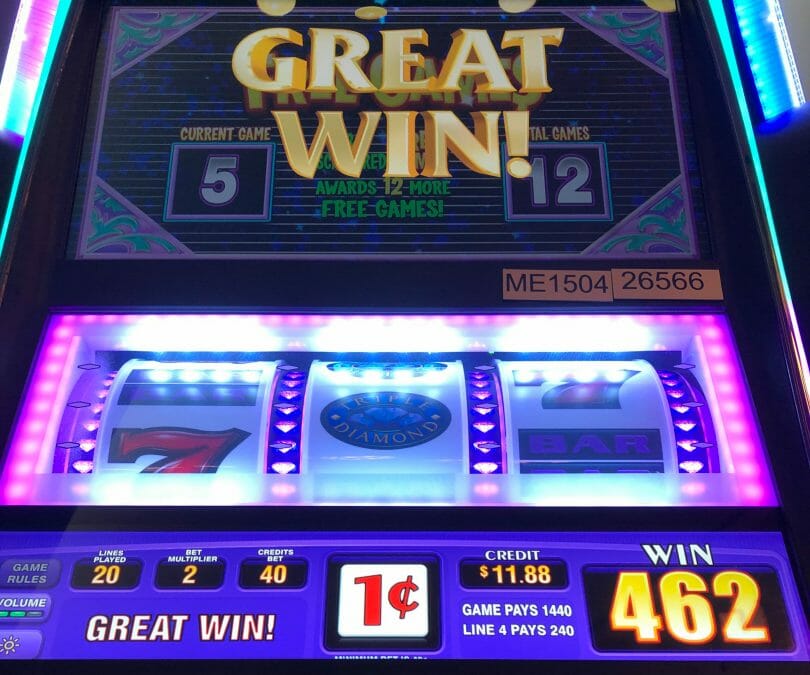 I recently wrote about Ainsworth’s Quick Spin slot machine, which is a great modern low volatility play. However, an older, but also fun, one comes from IGT in the form of the physical (or virtual) 3-reel Triple Double Diamond free games.

The game’s been out for some time, but IGT re-released it as part of its more modern reels games, ensuring it will live on for quite some time to come.

The game has a number of low-volatility traits going for it:

Normally, multipliers would indicate the potential for a lot more volatility, but the way the game is designed they add a bit, but in the right ways to make the game even more fun.

And indeed it’s the multipliers that can quickly amp up the hit, further helped by the 20 lines possible.

Getting a Free Games symbol on all three reels anywhere will yield the Free Games bonus, which gives you 12 spins at 2x the line pays. You can retrigger in the bonus, and the 2x can be combined with the Double and Triple Diamond symbols.

On a game like this, the free spins actually come pretty often, all things considered. It’s certainly not as hard as many of the modern IGT persistent reels games.

The end result is a pretty well balanced game that can yield big line hits frequently enough to make it fun, bonuses often enough to keep you engaged, and a volatility love enough to generally have some solid time on game if you want to play for awhile.

Here’s IGT’s promotional video for the game on its newer hardware:

Here is TheBigPayback‘s video playing the game on an older cabinet: