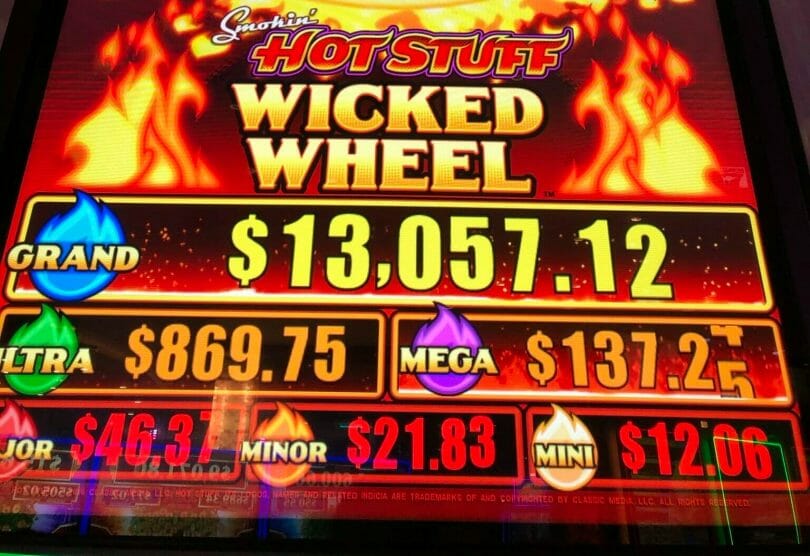 Sometimes, certain types of designs get adopted by multiple manufacturers and becomes a standardized symbol of something going on. One such thing that has developed over time is on certain games, such as the Wicked Wheel games like Smokin’ Hot Stuff, above, that flames or highlighting behind progressive numbers will take place.

Some players believe that this means that a progressive is “due” to hit. We know that other indicators, like a full pot, fireworks strip, etc., does not indicate a progressive is due to hit. That’s the case here too. But there is a mathematically sound statement happening here.

But we know that variance on a slot machine is real, and that through the random number generator the chances of winning a prize on any given spin is the same. So it doesn’t mean you have a better chance of hitting it now when the prize has flames or some other sort of indicator.

Instead, what it’s telling you is the value of the prize you will win, should you win it, is bigger than normal. Technically that means the machine’s theoretically going to pay out a bit better in the short term, although you’d have to be the one to win it to score that higher payout, of course.

If you come across a game where most of the progressives are lit up, that could be a reason to sit down because at some point you’ll win at least one, and they’re all above their average. It doesn’t mean you’ll leave the machine a winner because there’s other forces in play, but it does mean if you do get into the progressives, you will win a bit more than you would on an identical machine not in that state.

If you find yourself at a machine with a Must Hit By progressive that has some sort of indicator near it, that is a bit different as it likely means you’re approaching the upper end of the meter. Even here, this doesn’t necessarily mean it’s about to hit, but that it is closing in (20% of the meter or less in the G+ Deluxe example above), which too is above the average.

But Must Hit Bys do have an upper limit, and so in that way they are more of an indicator than an open-ended progressive.