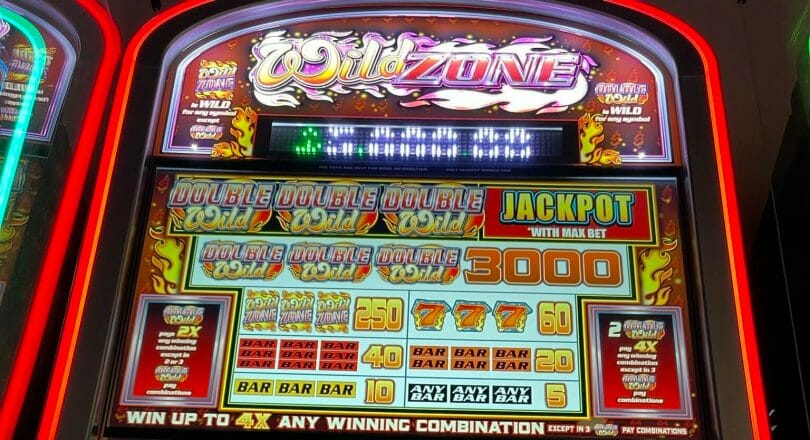 During my recent visit to Rocky Gap Casino, there were some mechanical reel slots, but one that caught my eye is one I can’t recall playing in the past, Wild Zone.

A few things stood out for me. The first was this was a nickel denomination, but a 9-line machine. This means the minimum bet was a mere 45 cents, although the max bet was $9.

The second was this game has no bonuses or features – it’s all about the line hits (and there’s multipliers to help juice them up), so it means pays are concentrated in the base game.

The first time I sat down at the game, betting minimum, it came out strong, with a quick $75 line hit on 45 cents.

I gave the game another go later in the weekend, putting $20 in, and played for easily a half hour on that $20, with decent line hits coming out with enough frequency that I doubled my bet and still continued to have success.

The game has double wild multipliers, with 2x (or 4x if two come out) your line hit. Three double wilds yield the top prize, which gets a boost at max bet. The top prize relative to the bet isn’t massive, so it shouldn’t be hugely difficult to hit, but the low top prize, combined with all the pays in the main game, make this a lower volatility game overall.

I had a great time on this game – it kept me occupied when tougher games weren’t cooperating and helped my budget survive and even thrive at one point thanks to the pays.

I don’t see these that often but will definitely play them again when I do!

Here is a video from Shamus of Slots playing the game on penny denomination and hitting the progressive:

Here is Charrua NYC playing the game at a 45 cent bet on an older machine: