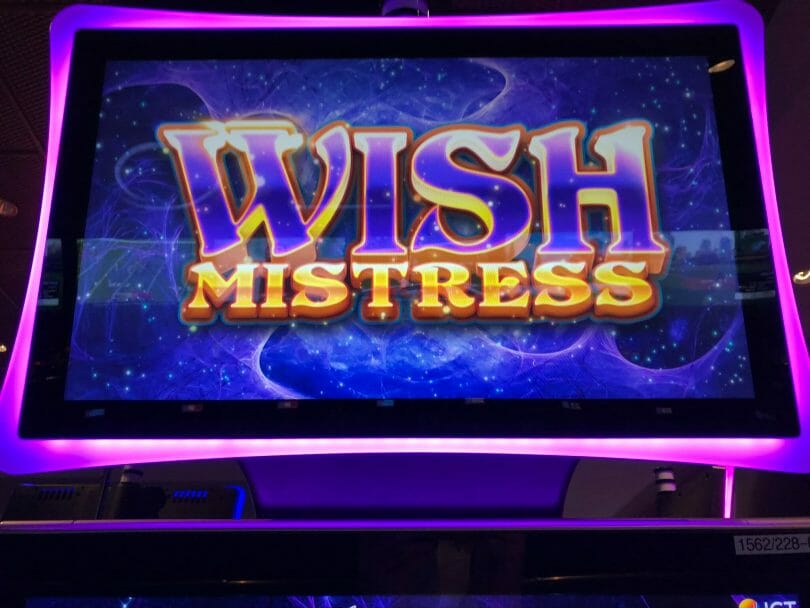 IGT continues to crank out bonus slots with persistent state features, and Wish Mistress is no exception. This game seems to follow in the footsteps of the Pure Recharge games like Electromax and Magic of the Nile, with multiple persistent bonus meters building to a spin enhancement.

Unlike those two, though, all the meters focus on basic wilds, and come out more frequently, making this a bit less exciting as some of the others. Let’s dive in.

Wish Mistress is a 5×4 reel set with 30 lines evaluated and 60 credit bet increments. The game features persistent state bonus meters above the reels in three gem colors, with each bet level housing its own set of bonus meters.

Anytime a gem lands of a given color, it increases the number collected on the meter. If four are collected, wilds are added to the reels based on that gem type and what it offers. The wilds matter because if you manage a full screen of wilds, you get a 50,000 credit payout times your line bet.

There is also a bonus round that links into the gem power-ups, which offers a volatility choice.

Relative to some other persistent state games that have been appearing, this is a relatively straightforward one to follow and understand.

Each gem has its own way of enhancing the reels with wilds. More than one enhancement can occur if you fill the meters in one shot.

The blue gem adds anywhere from 2 to 5 reels of wilds, most commonly 2 or 3. 5 would instantly offer the full screen wild payout of 50,000 credits times the line bet, so that would certainly be a rare circumstance on its own.

Red gems add 4 to 6 wilds in random positions on the reels. They can go basically anywhere, and do not have to line up in any useful way. Of the three, this is probably the least exciting enhancement.

The yellow gem enhancement works just like when a bubble appears over an Ocean Magic symbol. In this case, a space is chosen, and all the spaces around it, including diagonally, turn wild, meaning anywhere from 4 to 9 spaces will turn wild.

As mentioned earlier, you can have these combine if you complete the bonus meters of multiple gems in a single spin, which can increase the chances of a full screen of wilds.

It tends to be a volatility choice, as you can get 15 smaller paying spins or 2 much bigger paying spins with a lot more potential, as only one of the three features will activate on the former, and all three will activate each time on the latter, meaning a lot more of an opportunity to pour a lot of free spins onto the reels. You can see an example of a bonus in the Watch and Learn section below.

It is the gem bonus meters, and how full they are, that determines your advantage. The closer to full all three are, the better the potential advantage. But since these are basic wilds, without multipliers or anything else to show for it, it may not always be as lucrative a payout as some of the other games.

On the other hand, the features seemed to come with more regularity, closer to a Golden Egypt where you see the wilds with some regularity, at least in the time I spent with the game. So it may also mean more frequent opportunities for something to be left behind.

SlowPokeSlots features a bonus from the game in this video: