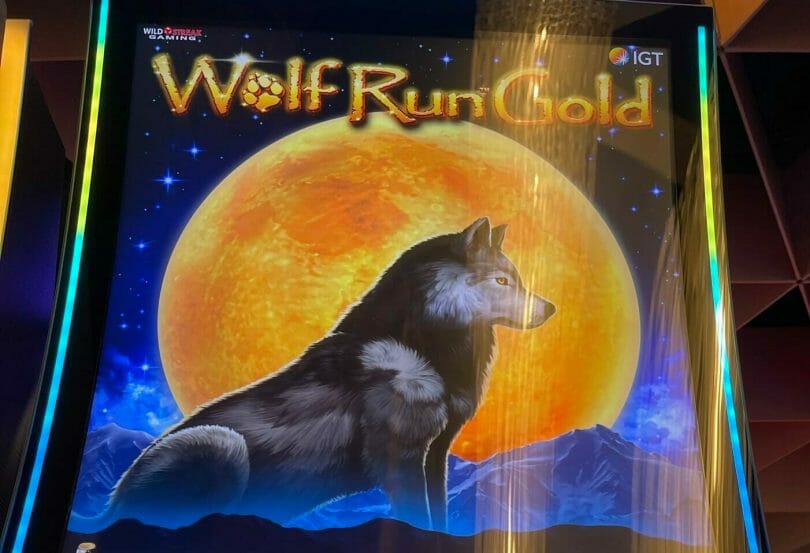 Wolf Run is one of those brands in the IGT fold that’s held up for quite a long time. The allure of big wins from big stacks of wilds can make for exciting moments, so it’s no surprise that IGT has tinkered with sequels over the years.

One of the more prominent is Wolf Run Gold, which expands upon the importance of the wilds with a new respin feature that can amp up the excitement, and pays, when gold symbols make their presence.

The enhanced setup comes with a 60 credit bet increment, vs. 40 on the original, not unusual for a slot sequel. But in both the base game and the free spins, the additional wilds amps up pays and certainly makes up for it.

The game features a stacked symbols replacement feature, and on each spin, whether base game, free game or respin, will select a symbol and the stacked symbols will be placed accordingly. This can include the gold wild symbol that leads to respins.

On any base game the wilds added feature can occur, in which a minimum of three gold wild symbols are added to the reels and the reels come to a stop. Pays are evaluated and the wheels spin again. If at least one gold wild symbol lands on a respin, another respin is awarded, after pays for the previous respin have been evaluated.

With the number of wilds potentially growing, regular wilds also still on the reels, and that stacked symbol replacement feature in play, there’s definitely the opportunity for multiple good line hits during the feature.

The free spins is kicked off similar to the standard Wolf Run free spins, with five free spins awarded when three bonus symbols land. In a twist, those turn into gold wild symbols which lock for the remainder of the bonus.

Whenever a bonus symbol lands during the bonus, an additional game is awarded, and that space turns wild for the remainder of the free spins, up to a total of 14 spins. In that way it’s not unlike Mr. Hyde’s Wild Ride or Hercules, both fun bonus rounds that lock wilds and give additional games.

One thing that’s interesting to note from the pay table is the reels for each free game is determined at the start of the spin, in part based on the number of wilds that are present.

Of course, like other games in the Wolf Run series, the big pays are found when stacks of wilds line up, but with the addition of these gold wild respins and sticky free games wilds, it further amps up the value and benefit that comes from a lot of wilds at once.

This is a fun sequel, not horribly tough, that has made its way out into casinos and should be readily available to find nowadays.

TheBigPayback had a great run on Wolf Run Gold, with multiple wilds added features and a free games round:

Slot Queen had a strong run on the game as well, including free games:

Brian Christopher had a fantastic bonus among his successful run on the game: