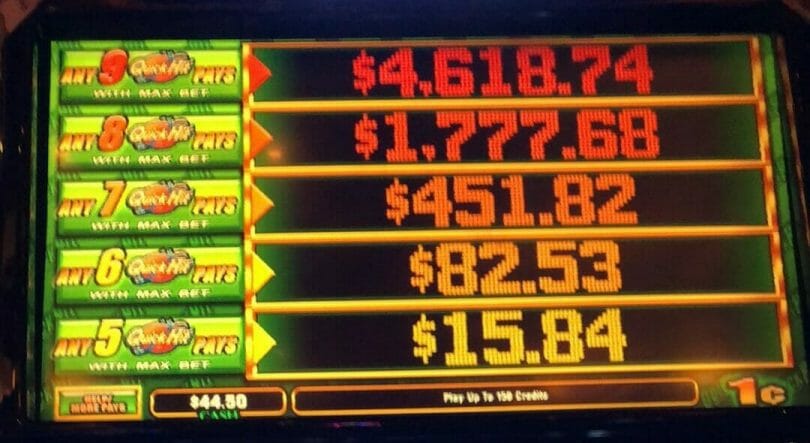 1. The Size of the Progressive (Usually) Doesn’t Indicate When It’s Going to Go Off

Hi, I have a question about Dancing Drums (regular). I know that on a 1c machine, the major starts at $800. So, yesterday, I was pretty surprised that there was 1c machine and the major was at like $1565…. do you think the odds are a lot greater (if at all) when the major is this high? I swear I have read before that some machines have a certain max out point where they need to pay out (not talking about the ones that openly state ‘must hit by’ when playing)….

A progressive will grow until it either hits a max-out point (whether by design, or by casino setting in certain cases), and/or it’s won. The chances of winning a traditional progressive doesn’t change when the value goes up. As such, most progressives don’t have a point they must hit, and a high number doesn’t indicate a progressive is due to hit.

The only time a progressive is a Must Hit By progressive is when it says so on the machine. Aside from clearly articulating the rules of the machine, manufacturers want players to know it works that way so it encourages more play as the number slowly approaches the upper end.

2. Accordingly, Players Should Always Pick the Highest Progressive Available for a Given Game

If the odds are the same regardless of what the progressive is set at, presuming all else equal (same game, same denomination, etc.), it’s always in the player’s best interest to sit down at the highest progressive available. That way, if you do win the progressive, you’ll win a bigger prize instead of a smaller prize.

You never know when you’re going to win a big progressives. As this was published I’ve won a few majors and a single grand, and they always seem to come out of the blue. Because I chose well, one of those majors worked out to be a handpay, because the bank of games had both a mini and a major well above the normal size, which caught my eye and led me to sit down and play (for the mini, ironically, but I got that one too).

When selecting the coins on the progressive picking screen for a game like Dancing Drums, do you have to bet the maximum (880 credits) in order to win the top jackpot or can you win the jackpot on a minimum bet (88 credits).

While there are certainly games that require you to max bet to be eligible for progressives (I’m looking at you Quick Hit series), most games give you access to the progressives at any level. However, the size of your bet does factor in to your chances of winning a given progressive. Generally speaking, the higher your bet, the more likely a progressive will come out. It’s traditionally handled one of two ways:

There are probably other ways this is or can be accomplished, but these are the two I see with the most frequency.

Sometimes casinos will fix progressives to be flat. Other times game makers will show four or more “jackpots” and some will be flat prizes. At that point they’re not progressives. Players can and should evaluate this in the grand scheme of things.

If a progressive isn’t going up (and isn’t maxed out, where it’s built up value and has numbers larger than other games of its type in the casino), it’s generally costing you as a player a bit in terms of the overall payback of the game, as a game designer usually places some small, but meaningful percentage of the overall payback into those progressives and how they grow over time.

In the case of flat progressives on games like Lightning Link, the word Mini and Minor are replacing credit prizes that would have simply been represented by a number – they’re not a prize to really truly get excited about.

So as a player it’s important to evaluate the game and know what those flat numbers mean – are all the machines like that in the casino? If not, play ones that aren’t fixed. And don’t go chasing “progressives” that aren’t really progressives if there are better opportunities elsewhere.

5. Progressive Games With Bags, Pots, Fireworks, Etc. Aren’t Telling You if A Game is Due to Hit

It’s increasingly common for a game to have one or more accumulators, that is, visual elements that grow and evolve as you play a game. Psychologically, it encourages many to play a game as it feels like a game is getting closer to a bonus. Instead, it’s more of a historical indicator of how long it’s been since a bonus has hit.

However, past performance doesn’t predict future results on a slot machine. The chances of a progressive win are no different from one spin to the next, presuming all else being equal (bet size and so on). So don’t get sucked in by those elements promising a bonus or a chance at a progressive, as it doesn’t guarantee anything.