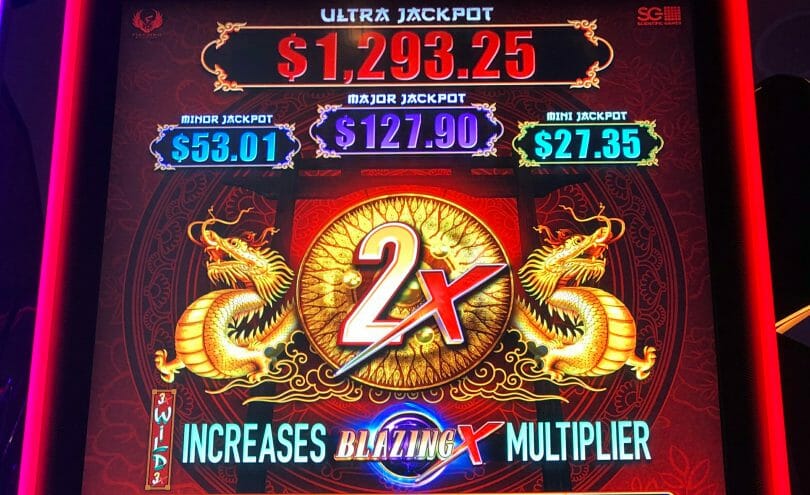 Game: Blazing X Asia
Manufacturer: Bally
Advantage play potential: Medium
What Makes it Special: Landing the wild on reel 3 increases the multiplier, which persists for three spins. Land the bonus while the multiplier is increased, and that’s your floor for the multiplier during the bonus round.

Blazing X Asia is a bit special for a few reasons. For one, it’s the first slot machine with persistent state elements I’ve reviewed from Bally. Second, it leverages a multiplier element for its persistent state system, which can if found left behind on a machine have some amazing potential. And third, the multiplier in the base game has an impact on the bonus round, if triggered.

With all of this in mind, let’s take a look at the Asia theme of Blazing X; the Las Vegas theme is a clone of Asia, so the notes for Asia will apply to Las Vegas as well (although we may have a review of that version in the future).

Blazing X Asia is a 5×5 reel set with 40 lines evaluated and 60 cent bet steps. The game features a jackpot feature as well as a multiplier feature that is linked to a reel-high wild symbol on reel 3.

The persistent state feature, the Blazing X multiplier, is separate per bet level and denomination (although I didn’t see a multi-denomination version in the game I played, but the pay table hints it’s possible).

That would imply a potential lower volatility scenario, but you blow some of that belief out of the water with multipliers on the Blazing X feature, which can reach 25x. The pays aren’t particularly robust even on the better symbols at five of a kind, so the multipliers are doing a lot of the work to pull up the pays, and that increases the volatility here.

When any portion of the wild reel appears on the middle reel, it will nudge to fill the reel and increase the multiplier for that spin and the next three spins, regardless of whether the spin was a winner or not.

The multipliers progress as follows: 1x, 2x, 3x, 5x, 10x, 25x. So landing the wild symbol five times, without it resetting by not appearing for three consecutive spins, can get you to a pretty robust 25x payout on line hits for at least three spins. If the wild lands during the three spins where 25x is already active, the multiplier stays at 25x but the countdown will reset to three spins again.

The Jackpot Feature is a predetermined picking screen (the unpicked choices are not revealed at the end of the feature). The chances of winning a jackpot increased based on your bet level. As such it works in theory similar to games like Fu Dao Le or Dancing Drums.

However, the difference for this particular game is that a multiplier could be revealed, which can then pay additional rounds of the same jackpot, but at the reset level (which is defined in the pay table).

In that way it’s not unlike the newer Wonder Woman games, where you could get, say, a 3x minor, but only the first minor is paid at what’s on the screen – the second and third are paid at the reset level.

Still, it’s a nice change that the progressives can be paid in multiples.

Like many Bally games, the free spin symbols appear on reels 2, 3 and 4 – get all three to trigger 10 free spins. If you have an active multiplier in the base game, it will be there exactly as you left it when you complete the bonus round.

Enter the bonus with a high enough multiplier, and/or get enough wild reels during the bonus, and it can have a lot of potential, as you’ll see by the video from Diana Evoni in the Watch and Learn section.

The multiplier is the advantage here, since you can get improved pays over the 1x level for however long it’s active. One thing that’s nice about this model is that you know how much you have to invest to play it off, or you get a higher multiplier which just improves the potential.

With a three spin maximum it’s not a lot to invest to see it through, and if you get a decent enough hit it can make it profitable quickly. And needless to say, but it’s here for completeness, the higher a multiplier left behind the better. Since the persistent state is connected to bet level, you can check each bet level to see what opportunities are available.

The fact that if you trigger a bonus with a multiplier active means you can carry that multiplier into the bonus is an added advantage; on other games I’ve tripped into a bonus while playing out an advantage, so the fact this is available is an additional perk, although more falling on the luck side of things since the chances of triggering a bonus in a few spins isn’t that high.

Here is RandomSlots‘ overview, which includes the pay tables:

Here is a video from TheBigPayBack that features all of the various aspects of the game:

And finally, here’s a video from Dianaevoni that shows how you can enter a bonus with a multiplier: