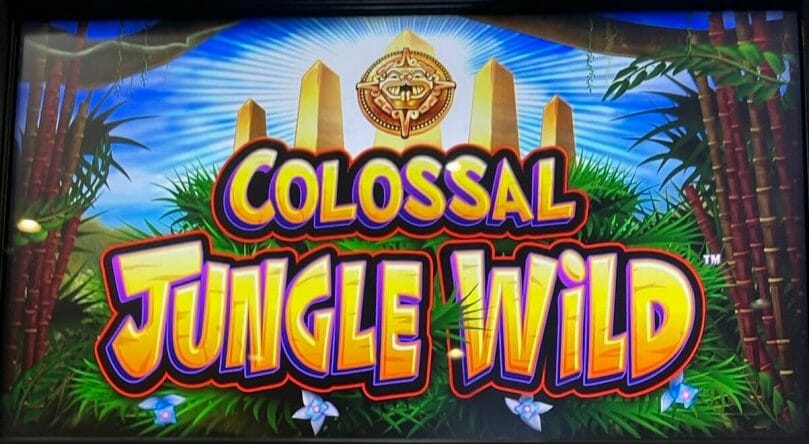 I’ve written about my enjoyment of the Jungle Wild series here in the past, and like Zeus, which got the Colossal Reels treatment with Zeus 1000, Jungle Wild too got a place in the series.

This game, like other Colossal Reels games, features 25 lines on the main 5×4 reel set and 75 lines on the colossal 5×10 reel set. It does have a slight increase in cost for 100 lines – 60 credits vs. 50 credits normally seen on the series.

The version I played still allowed for a choice of the number of line, in 20 line increments for 12 credits. If you like to play lower bets, that can be a nice bonus.

Like other Jungle Wilds, the wilds are pretty prominent. And like other Colossal Reels games, stacks of wilds filling a reel in the main set clones over to the Colossal Reels set.

That can lead to some good line hits, such as this example over a 100x win with only a percentage of the lines even paying anything.

Getting three or more of the pyramid symbols (which appear on reels 1, 3 and 5 of each reel set) triggers the bonus. The number of spins depend on the number of symbols:

Two wild reels are deployed each spin, which can appear on either the main or colossal reels. If it’s on the main reels, it clones over to the colossal reels like normal.

So there is definite potential, especially if you can get those wild reels on the main reels enough.

RandomSlots played on the Life of Luxury version: