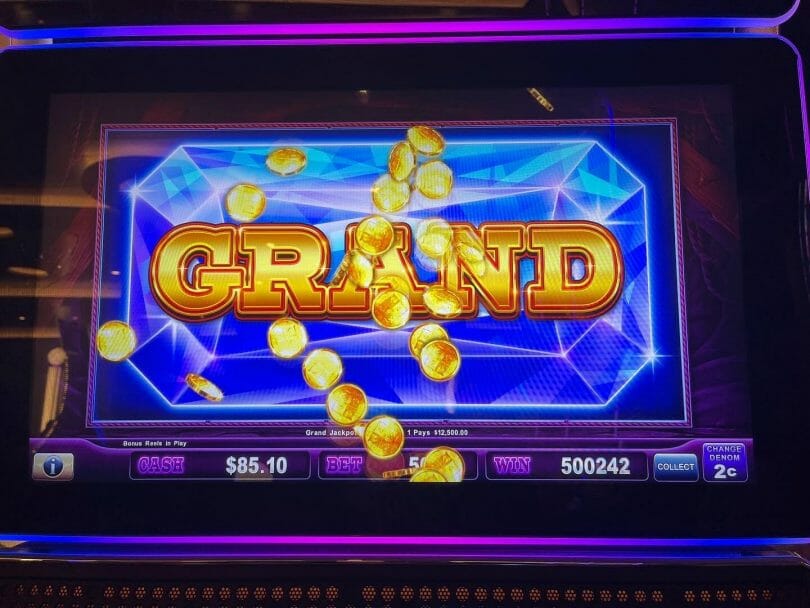 I took my fifth cruise on Carnival Mardi Gras recently, and one of the things that was unusual for me compared to previous cruises was the percentage of newer machines on the cruise ship. While the ship is pretty new, so it makes sense the games would be on the newer side overall, they had some very new games, including a couple I personally had never played before.

An interesting outcome of this was a high percentage of games with multiple jackpots, including the fabled grand jackpot on games like Lightning Link and Lock it Link. On the ship, most machines with these progressives had their top progressive frozen. This has a tendency to trim the overall payback a bit albeit not too much since it is just that one jackpot.

But it was also interesting to note that the number of massive jackpots being won on the ship, given the casino’s size, seemed way above what I’m used to seeing in any casino, cruise ship or not.

The very first night I was on board, I sat next to a woman betting $1.76 a spin on Dancing Drums and swiped her way to a Grand jackpot. I saw someone win the grand on Buffalo Gold Revolution the next day. The following day I saw a second Dancing Drums Grand jackpot. And these were just the ones I witnessed myself; there were constantly big jackpots being announced throughout the trip. A friend of mine saw her husband win $8,800 on a Grand on Fu Dai Lian Lian.

As for me, I was playing Eureka Reel Blast at $1 a spin on 2 cent denomination. I got the dynamite bonus and as the five spins to fill all the spaces were going on, I noticed it filling in quite quickly. For some reason I just had this feeling that I was going to get them all, and I did. Then I had the sense of mind to pull out my camera and record the big reel spinning, because for some reason I just had a feeling… and I landed the Grand.

The Grand was fixed like on the other machines, at a perfectly fine $12,500 – 12,500x my bet! This was certainly an unexpected twist but surely a welcome one, given that it basically made the trip.

The cruise I was on was also Carnival’s first $1 million slot tournament, which I participated but didn’t place in the money. However, my jackpot was the equivalent of winning 7th place, so I definitely felt like I got a wonderful consolation prize.

To answer a couple of questions I’ve already received from those who knew I won the Grand:

I cycled through a lot of emotions in a short time frame; by far this is my largest casino win of all time, both as a prize and as a multiple of my win. It’s going to be hard to top this one anytime soon, especially given I’ve been playing in casinos for nearly 20 years now. But it certainly is a memory I won’t soon forget.