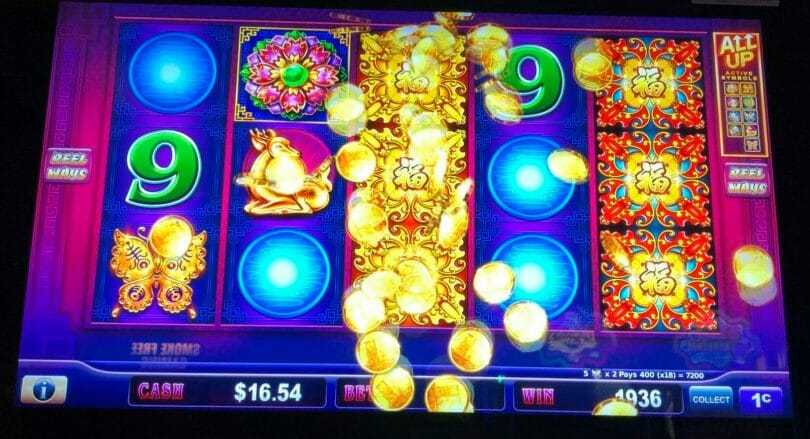 88 Fortunes kicked off a series of games called Duo Fu Duo Cai, which has a progressive feature in common with a predetermined pick and 12 coins.

The Mini, Minor, Major and Grand setup are pretty ubiquitous, but the use of the Fu babies and Fu bats as part of the games have a pretty distinctive look and feel. This game series also has the ability to bet between 1 and 5 gold symbols, with better pays attaching to those who are gold, and the progressives you’re eligible for based on the number of symbols.

Some of the games in the series are more known than others, and some are harder than others. One of the tougher entrants in my view is the Flower of Riches version.

This version’s core feature is an expanding wilds feature that will fill a whole reel with wilds when it lands and lines up with symbols, which means, along with stacked symbols and generous line pays, can get quite interesting quite quickly.

The game further adds to the potential by having a golden wild symbol, which when is incorporated in a line pay gives you a x2 multiplier. Expanding wilds plus a multiplier can really open up the overall potential of the game.

The flip side is it has a lot of dead spins, because much of the money is in the expanding wilds and the free spins.

Speaking of free spins, three or more bonus symbols trigger the free games bonus, with 10 free games always awarded, but 10x, 15x and 50x your bet paid for 3, 4 or 5 bonus symbols, respectively. Further potential in the bonus spins is yielded by the removal of the poker symbols, which follows the 88 Fortunes bonus model, where the same thing occurs. But with the expanding wilds, the payout potential increases.

My experience with this game has often been a routing followed by a strong line hit or bonus to build me back up to, if not even/above, then close. But you have to ride out some difficult periods to get to those line hits and bonuses. It’s a more emotional ride but can be a lot of fun, especially if those big line hits come out.

RandomSlots features the game with a bonus and also offers the pay table information:

Slot Queen started off this video with a good line hit, then a bonus:

TheBigPayback had a great run on the game in part thanks to a Major progressive win captured on tape: